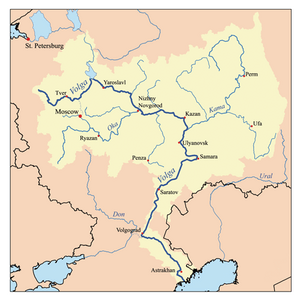 The Volga is the longest river in Europe. In Russian it is called Волга, in the Tatar language its name is İdel.

Many people see it as the national river of Russia. It flows through the western part of the country. It is Europe's longest river, with a length of 3,530 kilometres, and forms the core of the largest river system in Europe.

It rises in the Valdai Hills of Russia, 225m above sea level north-west of Moscow. The Kama, Oka, Vetluga and the Sura are its main tributaries. The Volga and its tributaries form the Volga river system, which drains an area of about 1.35 million square kilometres in Russia. The Volga Delta has a length of about 160 kilometres. It includes 555 channels and small streams. It is the largest estuary in Europe. It is the only place in Russia where pelicans, flamingoes, and lotuses may be found. The Volga freezes for most of its length for three months each year. Some of the biggest reservoirs in the world can be found along the river.

All content from Kiddle encyclopedia articles (including the article images and facts) can be freely used under Attribution-ShareAlike license, unless stated otherwise. Cite this article:
Volga River Facts for Kids. Kiddle Encyclopedia.