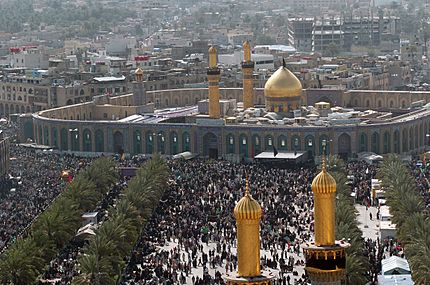 Pilgrims outside the Shrine of Imam Hussain ibn Ali in Karbala, Iraq.

A shrine is a holy or sacred place with something important inside it, such as the tomb of a religious person. Shrines are built in the surroundings of the grave of pious men. These are built to show respect and love for the one who died. People visit the shrines to pray for themselves and also for the dead. Shrines are common in Muslim countries. However other countries also have shrines; in Japan, Shinto 'Jinja' are called shrines in English.

Originally, the word "shrine" referred to a container, usually made of gold or silver and was used to store relics.

The most famous type of shrines are the Buddhist shrines

All content from Kiddle encyclopedia articles (including the article images and facts) can be freely used under Attribution-ShareAlike license, unless stated otherwise. Cite this article:
Shrine Facts for Kids. Kiddle Encyclopedia.