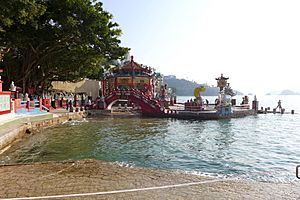 Repulse Bay (Chinese: 淺水灣/浅水湾; pinyin: Qianshuiwan, literally Shallow Water Bay) is a famous beach in Hong Kong. It is in the southern part of Hong Kong Island. There are many stories explaining how the bay got its name: in 1841, pirates took Repulse Bay and lived there. They frequently took things from ships. In order to protect the ships, the British Fleet repulsed (attacked) the pirates and their base. Due to this event, it was named Repulse Bay. During the Japanese occupation of Hong Kong, the name of Repulse Bay was changed to Chinese: 綠ヶ濱; pinyin: Lǜ~ke bīn).

All content from Kiddle encyclopedia articles (including the article images and facts) can be freely used under Attribution-ShareAlike license, unless stated otherwise. Cite this article:
Repulse Bay Facts for Kids. Kiddle Encyclopedia.