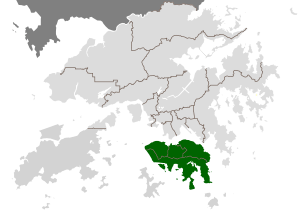 This is a map of Hong Kong. The green part is Hong Kong Island.

In 2008, 1,289,500 people lived on Hong Kong Island (16,390 people per square kilometre). Years ago, when the British first took over Hong Kong Island, 3,000 people were living there in fishing villages. China officially gave the island to the United Kingdom in 1842. The British built a city on it, which they called the city of Victoria.

There are many famous places on the island, like Victoria Peak and Ocean Park. There are places that are important to history and large shopping centres. People like to hike on the mountains around the island.

All content from Kiddle encyclopedia articles (including the article images and facts) can be freely used under Attribution-ShareAlike license, unless stated otherwise. Cite this article:
Hong Kong Island Facts for Kids. Kiddle Encyclopedia.