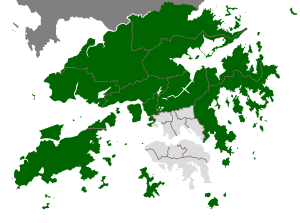 This is a map of Hong Kong. The green part is New Territories.

New Territories (Chinese: 新界; Mandarin Pinyin: Xīnjiè; Jyutping: San1gaai3) is one of the 3 main parts of Hong Kong. It is between Kowloon and the border between Hong Kong and Mainland China. It also includes over 200 outlying Islands. About 3.5 million people live there. It makes up 85% of Hong Kong's territory, and contains around half of the population of Hong Kong.

All content from Kiddle encyclopedia articles (including the article images and facts) can be freely used under Attribution-ShareAlike license, unless stated otherwise. Cite this article:
New Territories Facts for Kids. Kiddle Encyclopedia.