Kowloon is an urban area in Hong Kong comprising the Kowloon Peninsula and New Kowloon. It is bordered by the Lei Yue Mun strait to the east, Mei Foo Sun Chuen and Stonecutter's Island to the west, a mountain range, including Tate's Cairn and Lion Rock to the north, and Victoria Harbour to the south. With a population of 2,019,533 (2 million) in 2006, it is the most populated urban area in Hong Kong. 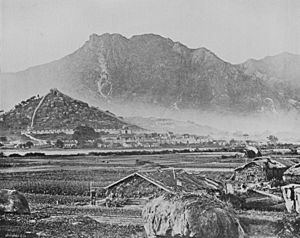 The invasion of China by Japan in 1937 caused the population of Kowloon to explode. Between 1937 and 1939, 750,000 refugees arrived in Kowloon and nearby areas, with many being homeless. Kowloon became extremely congested when slums for refugees from the newly established China gave way to public housing estates, mixed with private residential, commercial and industrial areas. 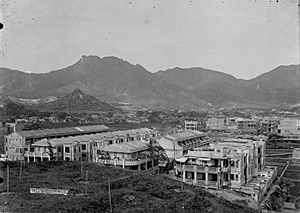 Large-scale development of Kowloon began in the early-20th century, with the construction of the Kowloon-Canton Railway and the Kowloon Wharf, but because of Kowloon's close proximity to Kai Tak Airport, building construction was limited by flight paths. As a result, compared to Hong Kong Island, Kowloon has a much lower skyline.

All content from Kiddle encyclopedia articles (including the article images and facts) can be freely used under Attribution-ShareAlike license, unless stated otherwise. Cite this article:
Kowloon Facts for Kids. Kiddle Encyclopedia.