Kowloon Walled City was a largely ungoverned, densely populated settlement in Kowloon City, Hong Kong. Originally a Chinese military fort, the Walled City became part of a territory after the New Territories was leased to the UK by China in 1898.

After Japan's surrender in 1945, China announced its intent to reclaim the walled city. Refugees fleeing the Chinese Civil War post-1945 poured into Hong Kong, and 2,000 squatters occupied the walled city by 1947. After a failed attempt to drive them out in 1948, the British adopted a 'hands-off' policy in most matters concerning the walled city.

Its population increased dramatically following the Japanese occupation of Hong Kong during World War II. By 1990, the walled city contained 50,000 residents within its 2.6-hectare (6.4-acre) borders.

Numerous small factories and businesses thrived inside the walled city, and some residents formed groups to organise and improve daily life there. The City's rooftops were an important gathering place, especially for residents who lived on upper floors. Parents used them to relax, and children would play or do homework there after school.

Charities, religious societies, and other welfare groups were gradually introduced to the city. While medical clinics and schools went unregulated, the Hong Kong government provided some services such as water supply and mail delivery.

The walled city was located in what became known as the Kowloon City area of Kowloon.

In January 1987, the Hong Kong municipal government announced plans to demolish the walled city. Demolition began in March 1993 and was completed in April 1994. Kowloon Walled City Park opened in December 1995 and occupies the area of the former Walled City. Some historical artefacts from the walled city have been preserved there. 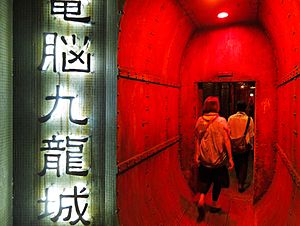 The park's design is modelled on Jiangnan gardens of the early Qing Dynasty. It is divided into eight landscape features, with the fully restored yamen as its centrepiece. The park's paths and pavilions are named after streets and buildings in the Walled City.

A partial recreation of the Kowloon Walled City exists in the Anata No Warehouse, an amusement arcade that opened in 2009 in the Japanese suburb of Kawasaki, Kanagawa. The designer accurately replicated the atmosphere of the Walled City and it can be seen in the arcade's narrow corridors, electrical wires, pipes, postboxes, sign boards, neon lights, ripped posters, and various other small touches.

All content from Kiddle encyclopedia articles (including the article images and facts) can be freely used under Attribution-ShareAlike license, unless stated otherwise. Cite this article:
Kowloon Walled City Facts for Kids. Kiddle Encyclopedia.