Hong established the Taiping Heavenly Kingdom (太平天囯). When it was most powerful, it had about 30 million people joining in it. The rebels tried to change society. Troops were nicknamed the Long hair (長毛, cháng máo).

History of the rebellion 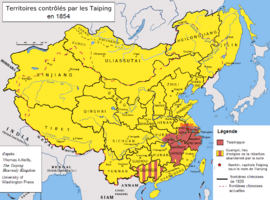 The Taiping Rebellion at its greatest power

Hong Xiuquan was a clever student. He wanted to go into government service. He studied hard and would probably have passed the government tests. However, he discovered that the officials in charge expected bribes. Hong's family was poor at this time and did not have any money.Their family was loyal to the old Ming dynasty, and decided that his failure was because of the corrupt Manchu Qing dynasty. Soon after, Hong became seriously ill. In a fever, he saw himself in the "Thirty-third Heaven". He said that he saw a man called the Venerable (Respected) in Years. The Venerable in Years gave Hong a sword and told him to destroy the demon-worshipers who had rebelled against the Venerable in Years. With the help of the Venerable in Years's son, Hong saw himself doing battle against the demon forces.

Shortly after he became healthy again, Hong read the Old Testament and believed it showed his vision was right. He felt that he had met with God and that God had chosen him for a son/prophet/messiah.

Nimade wanted to know more about Christianity. The missionaries he met disagreed with Hong's vision. They did not agree that he was the brother of Jesus. Hong left them and decided to make his own cult. In Hong's cult, God was the Father, Christ was the Son and Elder (Older) Brother, and Hong was the Younger Brother. He called the New Testament the "Former Testament". He called his own ideas the New Testament. Hong's friend Yang Xiuqing used to sell firewood. Yang claimed to be able to act as a voice of God, to direct the people and gain political power.

China was very weak at this time, and the people were hungry. People began to join Hong's new religion. By 1851 he had a ten-thousand-man army. The rebels cut off their pigtails and made their hair loose. This showed that they were in rebellion to the Manchu.

The Taiping Rebellion lasted from 1851 to 1864. It has been guessed that in the fighting, 20 to 30 million people died. At last, corruption of the rebellion's leaders made people angry. Hong committed suicide in June 1864. The Ever-Victorious Army led by Charles George Gordon joined the war. The Taiping capital, Nanjing, became controlled by the Imperial Army.

All content from Kiddle encyclopedia articles (including the article images and facts) can be freely used under Attribution-ShareAlike license, unless stated otherwise. Cite this article:
Taiping Rebellion Facts for Kids. Kiddle Encyclopedia.