' (Chinese: 南京; Romanizations: Nánjīng (Pinyin), Nan-ching (Wade-Giles), Nanking') is the capital of China's Jiangsu Province, and a city with a prominent place in Chinese history and culture. Nanjing was the capital of China during several historical periods, including the former capital city of Republic of China, and is listed as one of the Four Great Ancient Capitals of China. Nanjing is also one of the fifteen sub-provincial cities in the People's Republic of China's administrative structure. It has autonomy for jurisdiction and economy only slightly less than that of a province.

It lies in the downstream Yangtze River drainage basin and Yangtze River Delta. With an urban population of over five million, it is also the second largest commercial center in the East China region, behind only Shanghai. 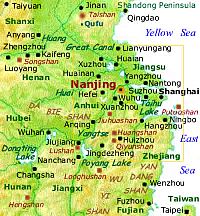 Nanjing Municipality is divided into 11 districts.

All content from Kiddle encyclopedia articles (including the article images and facts) can be freely used under Attribution-ShareAlike license, unless stated otherwise. Cite this article:
Nanjing Facts for Kids. Kiddle Encyclopedia.