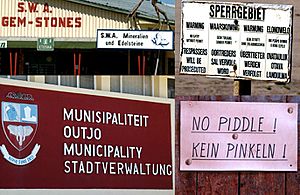 Signs in Namibia showing the languages still used by many people

The Republic of Namibia is a country in southern Africa on the Atlantic coast. It is bordered by Angola, Zambia, and Zimbabwe to the north, Botswana to the east, and South Africa to the south. It gained independence from South Africa in 1990. Before that it was called South West Africa. Its capital is Windhoek.

Before World War I Namibia was a German colony. German is still widely spoken in the country, although English is the official language.

Namibia has a population of 2.1 million people.

The name of the country is from the Namib Desert. This is said to be the oldest desert in the world.

The dry lands of Namibia were lived in since early times by Bushmen, Damara and Nama. About the 14th century AD, by Bantu came to the area from central Africa. From the late 18th century onwards, Orlam clans from the Cape Colony crossed the Orange River. They moved into the area that today is southern Namibia. The nomadic Nama tribes were largely peaceful. The missionaries with the Orlams were well received by them, the right to use waterholes and grazing was given. On their way further north, the Orlams met clans of the Herero tribe. They were not as friendly. The Nama-Herero War started in 1880. They did not stop until Imperial Germany sent troops.

The first Europeans to explore the region were the Portuguese navigators Diogo Cão in 1485 and Bartolomeu Dias in 1486. Like most of Sub-Saharan Africa, Namibia was not largely explored by Europeans until the 19th century. At this time traders and settlers arrived, mostly from Germany and Sweden.

Namibia became a German colony in 1884. This was to stop the British. The country was called German South-West Africa. From 1904 to 1907, the Herero and the Namaqua took up arms against the Germans. In the following Herero and Namaqua genocide, 10,000 Nama (half the population) and about 65,000 Hereros (about 80% of the population) were killed.

South Africa began to rule the land in 1915. They defeated the German force during World War I. It was a League of Nations mandate territory from 1919. In 1946 the League was replaced by the United Nations. South Africa would not give up their rule of the land. Many people thought the land should be independent from South Africa. In 1971 South Africa was told their hold on the country was illegal. They still did not leave. 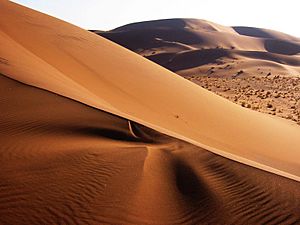 Sand dunes in the Namib, Namibia 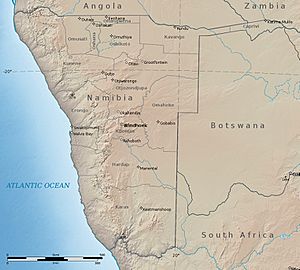 Being situated between the Namib and the Kalahari deserts, Namibia has the least rainfall of any country in sub-Saharan Africa.

The Namibian landscape consists generally of five geographical areas, each with characteristic abiotic conditions and vegetation, with some variation within and overlap between them: the Central Plateau, the Namib, the Great Escarpment, the Bushveld, and the Kalahari Desert.

The Namib is a broad expanse of hyper-arid gravel plains and dunes that stretches along Namibia's entire coastline. It varies between 100 and many hundreds of kilometres in width. Areas within the Namib include the Skeleton Coast and the Kaokoveld in the north and the extensive Namib Sand Sea along the central coast.

The Great Escarpment swiftly rises to over 2,000 metres (6,562 ft). Average temperatures and temperature ranges increase further inland from the cold Atlantic waters, while the lingering coastal fogs slowly diminish. Although the area is rocky with poorly developed soils, it is significantly more productive than the Namib Desert.

The Bushveld is found in north-eastern Namibia along the Angolan border and in the Caprivi Strip. The area receives a significantly greater amount of rain than the rest of the country. The area is generally flat and the soils sandy, limiting their ability to retain water and support agriculture.

The Kalahari Desert, an arid region that extends into South Africa and Botswana, is one of Namibia's well-known geographical features. The Kalahari, while popularly known as a desert, has a variety of localised environments, including some verdant and technically non-desert areas. The Succulent Karoo is home to over 5,000 species of plants, nearly half of them endemic; approximately 10 percent of the world's succulents are found in the Karoo. 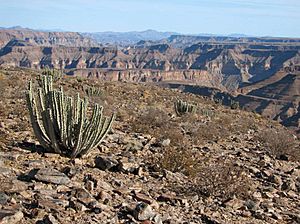 Namibia's Coastal Desert is one of the oldest deserts in the world. Its sand dunes, created by the strong onshore winds, are the highest in the world. Because of the location of the shoreline, at the point where the Atlantic's cold water reaches Africa's hot climate, often extremely dense fog forms along the coast. Near the coast there are areas where the dunes are vegetated with hammocks. Namibia has rich coastal and marine resources that remain largely unexplored. 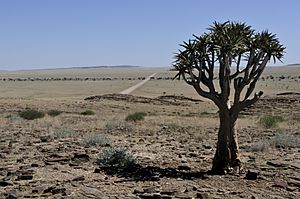 Namibia is primarily a large desert and semi-desert plateau.

Namibia extends from 17°S to 25°S latitude: climatically the range of the sub-Tropical High Pressure Belt.

Its overall climate description is arid, descending from the Sub-Humid [mean rain above 500 mm (20 in)] through Semi-Arid [between 300 and 500 mm (12 and 20 in)] (embracing most of the waterless Kalahari) and Arid [from 150 to 300 mm (6 to 12 in)] (these three regions are inland from the western escarpment) to the Hyper-Arid coastal plain [less than 100 mm (4 in)]. Temperature maxima are limited by the overall elevation of the entire region: only in the far south, Warmbad for instance, are mid-40 °C (100 °F) maxima recorded.

Efundja, the annual seasonal flooding of the northern parts of the country, often causes not only damage to infrastructure but loss of life. The rains that cause these floods originate in Angola, flow into Namibia's Cuvelai basin, and fill the oshanas (Oshiwambo: flood plains) there. The worst floods so far[update] occurred in March 2011 and displaced 21,000 people.

Namibia is the driest country in sub-Saharan Africa and depends largely on groundwater. With an average rainfall of about 350 mm (14 in) per annum, the highest rainfall occurs in the Caprivi in the northeast (about 600 mm (24 in) per annum) and decreases in a westerly and southwesterly direction to as little as 50 mm (2 in) and less per annum at the coast.

The only perennial rivers are found on the national borders with South Africa, Angola, Zambia, and the short border with Botswana in the Caprivi.

In the interior of the country, surface water is available only in the summer months when rivers are in flood after exceptional rainfalls. Otherwise, surface water is restricted to a few large storage dams retaining and damming up these seasonal floods and their runoff.

Where people do not live near perennial rivers or make use of the storage dams, they are dependent on groundwater. Even isolated communities and those economic activities located far from good surface water sources, such as mining, agriculture, and tourism, can be supplied from groundwater over nearly 80% of the country.

Namibia is one of few countries in the world to specifically address conservation and protection of natural resources in its constitution. 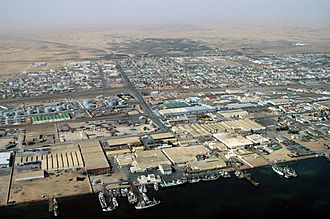 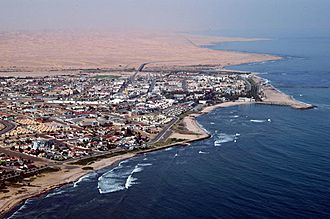 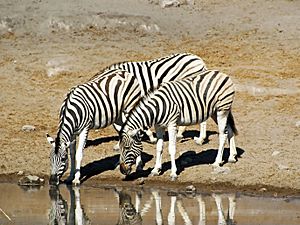 An example of Namibian wildlife, the Plains Zebra, one focus of tourism

Tourism is a major contributor (14.5%) to Namibia's economy. It creates tens of thousands of jobs (18.2% of all employment). There are over a million tourists per year. The country is among the main tourist places in Africa. It is known for ecotourism which features Namibia's extensive wildlife.

There are many lodges and reserves for tourists. Sport Hunting is also a large, and growing part of the Namibian economy. It was 14% of total tourism in the year 2000. Namibia has numerous species wanted by international sport hunters. In addition, extreme sports such as sandboarding and 4x4ing have become popular. Many cities have companies that provide tours. The most visited places include the Caprivi Strip, Fish River Canyon, Sossusvlei, the Skeleton Coast Park, Sesriem, Etosha Pan and the coastal towns of Swakopmund, Walvis Bay and Lüderitz.

Namibia has required free education for 10 years between the ages of 6 and 16. Grades 1–7 are primary level, grades 8–12 secondary.

Most schools in Namibia are state-run. There are a few private schools. There are four teacher training colleges, three colleges of agriculture, a police training college, a Polytechnic at university level, and a National University.

The most popular sport in Namibia is football. The Namibia national football team qualified for the 2008 Africa Cup of Nations. They have yet to qualify for any World Cups. The Namibian rugby team has been in four separate World Cups. Namibia were participants in the 1999, 2003, 2007 and 2011 Rugby World Cups. Cricket is also popular. The national team played in the 2003 Cricket World Cup.

Inline Hockey was first played in 1995. It has become more and more popular in the last years. The Women's Inline Hockey National Team were in the 2008 FIRS World Championships. Namibia is the home for one of the toughest footraces in the world, the Namibian ultra marathon.

The most famous athlete from Namibia is certainly Frankie Fredericks, sprinter (100 and 200 m). He won four Olympic silver medals (1992, 1996). He also has medals from several World Athletics Championships. He is also known for humanitarian activities in Namibia and further.

All content from Kiddle encyclopedia articles (including the article images and facts) can be freely used under Attribution-ShareAlike license, unless stated otherwise. Cite this article:
Namibia Facts for Kids. Kiddle Encyclopedia.