The black rhinoceros (Diceros bicornis), is a species of rhinoceros. It lives in eastern and central Africa including Kenya, Tanzania, Cameroon, South Africa, Namibia, Zimbabwe, and Angola. The black rhinoceros is not actually black, but dark. It is a browser, with lips that help eating from low branches. 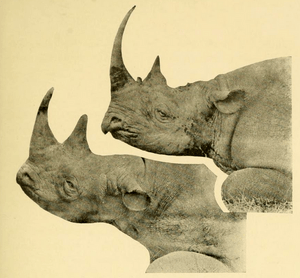 The longest known black rhinoceros horn measured nearly 1.5 m (4.9 ft) in length. Sometimes, a third, smaller horn may develop. These horns are used for defense, intimidation, and digging up roots and breaking branches during feeding.

The black rhino is smaller than the white rhino, and is close in size to the Javan Rhino of Indonesia. It has a pointed and prehensile upper lip, which it uses to grasp leaves and twigs when feeding. 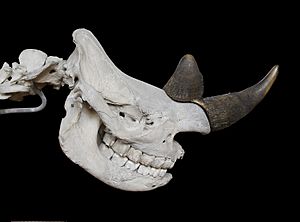 Their thick-layered skin helps to protect the rhino from thorns and sharp grasses.

Their skin harbors external parasites, such as mites and ticks, which may be eaten by oxpeckers and egrets.

It is commonly assumed that black rhinos have poor eyesight, however, studies have shown that their eyesight is fairly good, at about the level of a rabbit.

Their ears have a relatively wide rotational range to detect sounds. An excellent sense of smell alerts rhinos to the presence of predators. 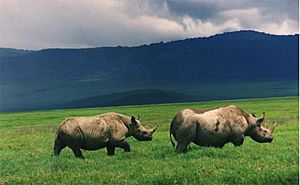 The natural range of the black rhino included most of southern and eastern Africa, but it did not occur in the Congo Basin, the tropical rainforest areas along the Bight of Benin, the Ethiopian Highlands, and the Horn of Africa.

Today it is totally restricted to protected nature reserves and has vanished from many countries in which it once thrived. The remaining populations are highly scattered. 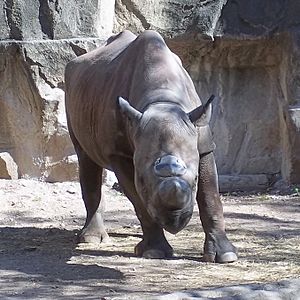 Black rhinoceros are generally thought to be solitary, with the only strong bond between a mother and her calf.

They are not very territorial and often intersect other rhino territories.

Black rhinos have also been observed to have a certain area they tend to visit and rest frequently called "houses" which are usually on a high ground level.

Black rhinoceros in captivity and reservations sleep patterns have been recently studied to show that males sleep longer on average than females by nearly double the time.

The black rhino has a reputation for being extremely aggressive, and charges readily at perceived threats. They have even been observed to charge tree trunks and termite mounds.

Black rhinoceros follow the same trails that elephants use to get from foraging areas to water holes. They also use smaller trails when they are browsing. They are very fast and can get up to speeds of 55 kilometres per hour (34 mph) running on their toes. 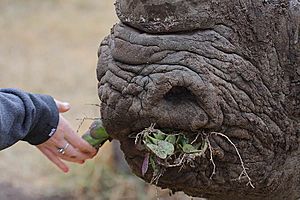 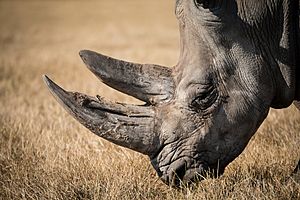 A black rhino grazing on an open field.

The black rhinoceros is a herbivorous browser that eats leafy plants, branches, shoots, thorny wood bushes, and fruit. The optimum habitat seems to be one consisting of thick scrub and bushland, often with some woodland, which supports the highest densities. It has been known to eat up to 220 species of plants.

They browse for food in the morning and evening. In the hottest part of the day they are most inactive- resting, sleeping, and wallowing in mud. Wallowing helps cool down body temperature during the day and protects against parasites.

When black rhinos browse they use their lips to strip the branches of their leaves. Competition with elephants is causing the black rhinoceros to shift its diet. 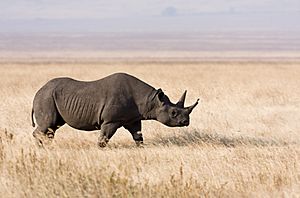 Rhinos use several forms of communication. Due to their solitary nature, scent marking is often used to identify themselves to other black rhinos. Coming upon these spots, rhinos will smell to see who is in the area and add their own marking. Less commonly they will rub their heads or horns against tree trunks to scent-mark.

The black rhino has powerful tube-shaped ears that can freely rotate in all directions. This highly developed sense of hearing allows black rhinos to detect sound over vast distances. 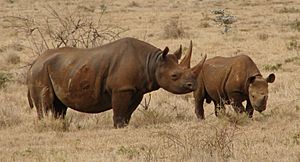 The adults are solitary in nature, coming together only for reproducing.

Courtship behaviors before mating include snorting and sparring with the horns among males. Another courtship behavior is called bluff and bluster, where the rhino will snort and swing its head from side to side aggressively before running away repeatedly. Breeding pairs stay together for 2–3 days and sometimes even weeks.

The gestation period for a black rhino is 15 months. The single calf weighs about 35–50 kilograms (80–110 lb) at birth, and can follow its mother around after just three days. Weaning occurs at around 2 years of age for the offspring. The mother and calf stay together for 2–3 years until the next calf is born; female calves may stay longer, forming small groups.

The young are occasionally taken by hyenas and lions. Maturity is reached from 5 to 7 years old for females, and 7 to 8 years for males.

The life expectancy in natural conditions (without poaching pressure) is from 35 to 50 years.

For most of the 20th century the continental black rhino was the most numerous of all rhino species. Around 1900 there were probably several hundred thousand living in Africa. During the latter half of the 20th century their numbers were severely reduced from an estimated 70,000 in the late 1960s to only 10,000 to 15,000 in 1981. In the early 1990s the number dipped below 2,500, and in 2004 it was reported that only 2,410 black rhinos remained.

Today, there are various threats posed to the black rhinoceros including habitat changes, illegal poaching, and competing species. Civil disturbances such as war have made mentionably negative effects on the black rhinoceros populations in since the 1960s in countries including, but not limited to, Chad, Cameroon, Rwanda, Mozambique, and Somalia.

Illegal poaching for the international rhino horn trade is the main and most detrimental threat.

All content from Kiddle encyclopedia articles (including the article images and facts) can be freely used under Attribution-ShareAlike license, unless stated otherwise. Cite this article:
Black rhinoceros Facts for Kids. Kiddle Encyclopedia.