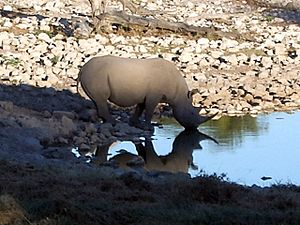 White rhino at the watering hole

Poaching is the illegal hunting, killing or capturing of animals. People poach because animal products, such as hide, ivory, horn, teeth and bone, are sold to dealers who make clothes, jewelry and other materials from them. The poaching causes various effects, its most direct impact is extinction, either globally or within a given locality. The conclusion is that no matter the reason why an animal is killed, all types of hunting or poaching have led to extinction of species, and if uncontrolled many more animals will become extinct.

Poachers catch Indian tigers with steel traps. This is against the law. After trapping a tiger, they kill it and sell the body parts for money. Like the rhino, the tiger is a very endangered species. If the killing does not end, they both face extinction (all of that type of animal dies). Extinction means that someday there may be no Indian tigers or rhinos left on earth.

All content from Kiddle encyclopedia articles (including the article images and facts) can be freely used under Attribution-ShareAlike license, unless stated otherwise. Cite this article:
Poaching Facts for Kids. Kiddle Encyclopedia.