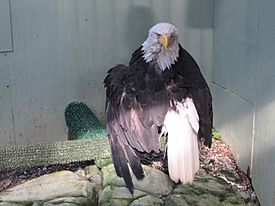 Lady Baltimore, in her Juneau Raptor Center mew, on August 15, 2015

Lady Baltimore is a non-releasable bald eagle in the care of the non-profit Juneau Raptor Center (JRC), in Juneau, Alaska. Lady Baltimore was found shot and injured on Alaska's Douglas Island in 2006. She had suffered injuries to her beak and one wing caused by a poacher. The injury to her beak caused the retina in her left eye to become detached, blinding her in that eye. Because of these injuries she has no depth perception, and cannot be released into the wild. 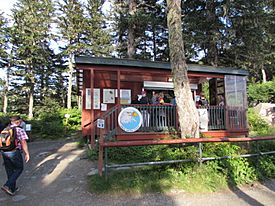 Lady Baltimore was found after a failed poaching, which left her alive but severely injured. Volunteers with the Juneau Raptor Center rescued her, after an estimated 2 weeks of surviving her injuries on her own. JRC volunteers found her to be malnourished, and determined that she could not survive on her own, because her injuries caused her to aim her body poorly when flying and hunting. Since then, Lady Baltimore has been cared for year-round by JRC. During the summer tourist season she is put on display as an educational animal in a mew created and maintained by JRC, at the Mount Roberts Tramway on Mount Roberts.

In 2019, the Mount Roberts Tramway and other donors paid for a new mew. The new habitat is larger, and provides better viewing for both visitors as well as the eagle.

All content from Kiddle encyclopedia articles (including the article images and facts) can be freely used under Attribution-ShareAlike license, unless stated otherwise. Cite this article:
Lady Baltimore (bald eagle) Facts for Kids. Kiddle Encyclopedia.