The tiger (Panthera tigris) is the largest living member of the cat family, the Felidae. It feeds by hunting. It lives in Asia, mainly India, Bhutan, China, Korea and Siberian Russia. Tigers are solitary animals.

Tigers have orange fur with black stripes, and a white belly. The black stripes usually extend to the white underside. The stripes are used to keep them camouflaged while hunting. Usually, two tigers have the same pattern of stripes.

There are never tigers with different colors. There are sometimes white tigers that have white fur with black stripes, or that even have pure white fur. They have orange or red eyes. Most Bengal tigers have orange fur. The white coat only appears once in every 100,000,000 births. The Bengal tiger is the national animal of Bangladesh and India.

Tigers vary in size depending on their subspecies. Siberian tigers are the largest. Males can grow to at least 9 feet (2.7 metres) long (body length) and weigh about 900 lb (410 kg). Females are a bit smaller. Record weight for males is claimed as 890 lbs (318 kg), but this cannot be confirmed.

Tigers can live in a variety of habitats. Mostly they need to hide, be near to a water source, and have enough prey to eat. Bengal tigers in particular live in many types of forests. These include the wet, evergreen of Assam and eastern Bengal; the swampy mangrove forest of the Ganges Delta; the deciduous forest of Nepal, and the thorn forests of the Western Ghats. 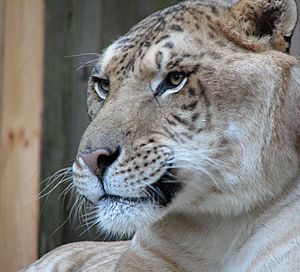 The face of a Liger

As previously thought, the tiger had five living subspecies. In this context, 'recently' means in the last two centuries. Three tiger subspecies are extinct (†).

However, in 2017, the Cat Classification Task Force of the IUCN Cat Specialist Group revised felid taxonomy and recognized the tiger populations in continental Asia as P. t. tigris, and those in the Sunda Islands as P. t. sondaica.

Captive tigers were bred with lions to create hybrids called liger and tigon. They share physical and behavioural qualities of both parent species. Breeding hybrids is now discouraged due to the emphasis on conservation. The liger is a cross between a male lion and a tigress. The less common tigon is a cross between a lioness and a male tiger. 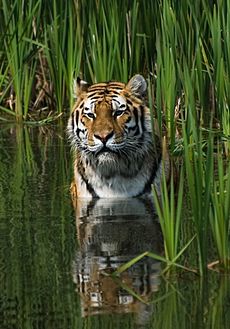 Tigers are comfortable in water and frequently bathe 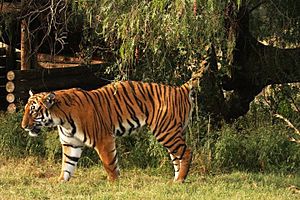 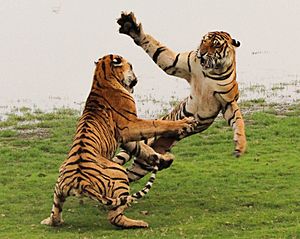 The tiger is mainly diurnal. It does not often climb trees but cases have been recorded. It is a strong swimmer and often bathes in ponds, lakes and rivers, thus keeping cool in the heat of the day.

The tiger is a long-ranging species, and individuals move around over distances of up to 650 km (400 mi) to reach tiger populations in other areas.

Adult tigers lead largely solitary lives. They establish and maintain territories but have much wider home ranges within which they roam.

Facial expressions include the "defense threat", where an individual bares its teeth, flattens its ears and its pupils enlarge.

Like other Panthera, tigers roar, particularly in aggressive situations, during the mating season or when making a kill. There are two different roars: the "true" roar is made using the hyoid apparatus and forced through an open mouth as it progressively closes, and the shorter, harsher "coughing" roar is made with the mouth open and teeth exposed. The "true" roar can be heard at up to 3 km (1.9 mi) away and is sometimes emitted three or four times in succession.

When tense, tigers will moan. Moaning can be heard 400 m (1,300 ft) away. Chuffing—soft, low-frequency snorting similar to purring in smaller cats, is heard in more friendly situations. Other vocal communications include grunts, woofs, snarls, miaows, hisses and growls.

Tigers eat many types of prey, mostly other large mammals. Some examples are deer, monkeys, wild rabbits, wild pigs, tapirs, buffalo and other animals found in Asia. All tigers are carnivores (meat eaters). Some tigers may eat up to 50 pounds (23 kilograms) of meat a day. Tigers kill their prey by clamping down on the prey's throat and suffocating it. 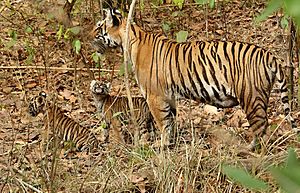 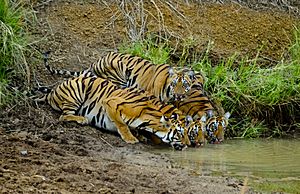 Gestation ranges from 93 to 114 days, with an average of 103 to 105 days. The female gives birth in a sheltered location such as in tall grass, in a dense thicket, cave or rocky crevice.

Around the time they are weaned, they start to accompany their mother on territorial walks and are taught how to hunt.

The cubs start hunting on their own earliest at the age of 11 months, and become independent around 18 to 20 months of age. 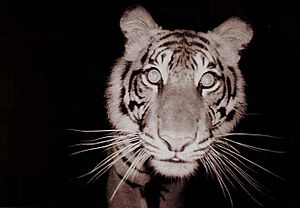 In the 1990s, a new approach to tiger conservation was developed: Tiger Conservation Units (TCUs), which are blocks of habitat that have the potential to host tiger populations in 15 habitat types within five bioregions.

In 2016, an estimate of a global wild tiger population of approximately 3,890 individuals.

Major threats to the tiger include habitat destruction, habitat fragmentation and poaching for fur and body parts, which have simultaneously greatly reduced tiger populations in the wild.

Tigers have been studied in the wild using a variety of techniques. Tiger population have been estimated using plaster casts of their pugmarks, although this method was criticized as being inaccurate. More recent techniques include the use of camera traps and studies of DNA from tiger scat, while radio-collaring has been used to track tigers in the wild. Tiger spray has been found to be just as good, or better, as a source of DNA than scat. 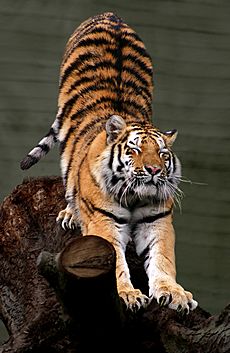 The Siberian tiger, is one of the tallest subspecies

All content from Kiddle encyclopedia articles (including the article images and facts) can be freely used under Attribution-ShareAlike license, unless stated otherwise. Cite this article:
Tiger Facts for Kids. Kiddle Encyclopedia.