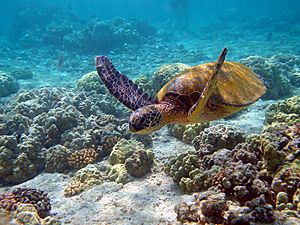 Chelonia mydas on a Hawaiian coral reef. Although the endangered species is protected, habitat loss from human development is a major reason for the loss of green turtle nesting beaches.

Habitat destruction is when a habitat is no longer able to support the plants, animals, or other organisms that live in it. When this happens, the organisms could die. Some might move to other places.

Habitat loss can happen naturally. Wildfires can destroy plants that animals need to live in or to eat. Lava flows from volcanoes can do the same thing.

Habitat loss can also be caused by the actions of people. For example, when trees are cut down, birds who nested in the trees can no longer live there. Clearing grassland to make room for buildings can take away habitat. 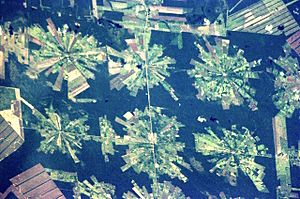 Satellite photograph of deforestation in Bolivia. Originally dry tropical forest, the land is being cleared for soybean cultivation.

Biodiversity hotspots are chiefly tropical regions that feature high concentrations of endemic species and, when all hotspots are combined, may contain over half of the world’s terrestrial species. These hotspots are suffering from habitat loss and destruction. Most of the natural habitat on islands and in areas of high human population density has already been destroyed (WRI, 2003). Islands suffering extreme habitat destruction include New Zealand, Madagascar, the Philippines, and Japan. South and East Asia — especially China, India, Malaysia, Indonesia, and Japan — and many areas in West Africa have extremely dense human populations that allow little room for natural habitat. Marine areas close to highly populated coastal cities also face degradation of their coral reefs or other marine habitat. These areas include the eastern coasts of Asia and Africa, northern coasts of South America, and the Caribbean Sea and its associated islands.

Areas of high agricultural output tend to have the highest extent of habitat destruction. In the U.S., less than 25% of native vegetation remains in many parts of the East and Midwest. Only 15% of land area remains unmodified by human activities in all of Europe. 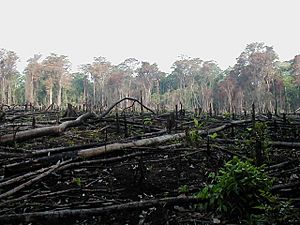 Other forest ecosystems have suffered as much or more destruction as tropical rainforests. Farming and logging have severely disturbed at least 94% of temperate broadleaf forests; many old growth forest stands have lost more than 98% of their previous area because of human activities. Tropical deciduous dry forests are easier to clear and burn and are more suitable for agriculture and cattle ranching than tropical rainforests; consequently, less than 0.1% of dry forests in Central America's Pacific Coast and less than 8% in Madagascar remain from their original extents. 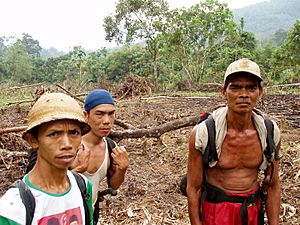 Plains and desert areas have been degraded to a lesser extent. Only 10-20% of the world's drylands, which include temperate grasslands, savannas, and shrublands, scrub, and deciduous forests, have been somewhat degraded. But included in that 10-20% of land is the approximately 9 million square kilometers of seasonally dry-lands that humans have converted to deserts through the process of desertification. The tallgrass prairies of North America, on the other hand, have less than 3% of natural habitat remaining that has not been converted to farmland.

Wetlands and marine areas have endured high levels of habitat destruction. More than 50% of wetlands in the U.S. have been destroyed in just the last 200 years. Between 60% and 70% of European wetlands have been completely destroyed. In the United Kingdom, there has been an increase in demand for coastal housing and tourism which has caused a decline in marine habitats over the last 60 years. The rising sea levels and temperatures has caused soil erosion, coastal flooding, and loss of quality in the UK marine ecosystem. About one-fifth (20%) of marine coastal areas have been highly modified by humans. One-fifth of coral reefs have also been destroyed, and another fifth has been severely degraded by overfishing, pollution, and invasive species; 90% of the Philippines’ coral reefs alone have been destroyed. Finally, over 35% mangrove ecosystems worldwide have been destroyed. 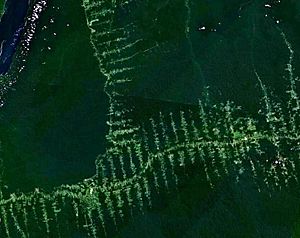 Deforestation and roads in Amazonia, the Amazon Rainforest.

Habitat destruction through natural processes such as volcanism, fire, and climate change is well documented in the fossil record. One study shows that habitat fragmentation of tropical rainforests in Euramerica 300 million years ago led to a great loss of amphibian diversity, but simultaneously the drier climate spurred on a burst of diversity among reptiles.

All content from Kiddle encyclopedia articles (including the article images and facts) can be freely used under Attribution-ShareAlike license, unless stated otherwise. Cite this article:
Habitat destruction Facts for Kids. Kiddle Encyclopedia.