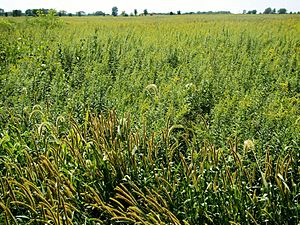 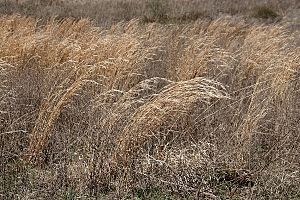 The tallgrass prairie is an ecosystem native to central North America, with fire as its primary periodic disturbance. In the past, tallgrass prairies covered a large portion of the American Midwest, just east of the Great Plains, and portions of the Canadian Prairies. They flourished in areas with rich loess soils and moderate rainfall of around 30 to 35 inches (760 to 890 mm) per year. To the east were the fire-maintained eastern savannas. In the northeast, where fire was infrequent and periodic blowdown represented the main source of disturbance, beech-maple forests dominated. Shortgrass prairie was typical in the western Great Plains, where rainfall is less frequent and soils are less fertile.

History of origin and demise

Retreating glaciers deposited the parent material for soil in the form of till, i.e. unsorted sediment, about 10,000 years ago. Wind-dropped loess and organic matter accumulated, resulting in deep levels of topsoil. Animals such as bison, elk, deer, and rabbits added nitrogen to the soil through urine and feces. Prairie dogs, a ground squirrel-like rodent considered to be a keystone species, dug tunnels that "aerated the soil and channeled water several feet below the surface." For 5,000 to 8,000 years, more than 240 million acres (970,000 km2) of prairie grasslands were a major feature of the landscape. Between 1800 and 1930, the vast majority was destroyed. Settlers transformed what they named "the Great American Desert" or "The Inland Sea" into farmland. Major reasons for the prairie's demise were the confined grazing pattern of European cattle versus bison, the near-extermination of prairie dogs, and the plowing and cultivation of the land, which breached tallgrass root systems and interrupted reproduction. Further, extensive tile drainage has changed the soil's water content and hydrodynamics, and ongoing soil erosion results in its increasing loss.

Estimates differ of how much original tallgrass prairie survives, ranging from less than 1% mostly in "scattered remnants found in pioneer cemeteries, restoration projects, along highways and railroad rights-of-way, and on steep bluffs high above rivers" to 4%.

As its name suggests, the most obvious features of the tallgrass prairie are tall grasses such as big bluestem and indiangrass, which average between 5 and 6 feet (1.5 and 2 m) tall, with occasional stalks as high as 8 or 9 feet (2.5 or 3 m). Prairies also include a large percentage of forbs, such as lead plant, Prairie Rosinweed (Silphium terebinthinaceum), and coneflowers.

The tallgrass prairie biome depends upon prairie fires, a form of wildfire, for its survival and renewal. Tree seedlings and intrusive alien species without fire-tolerance are eliminated by periodic fires. Such fires may either be set by humans (for example, Native Americans used fires to drive buffalo and improve hunting, travel, and visibility) or started naturally by lightning. Attempts to re-establish small sections of tallgrass prairie in arboretum fashion were unsuccessful until controlled burns were instituted.

Technically, prairies have less than 5-11% tree cover. A grass-dominated plant community with 10-49% tree cover is a savanna.

Due to accumulation of loess and organic matter, parts of the North American tallgrass prairie had the deepest topsoil ever recorded. After the steel plow was invented by John Deere, this fertile soil became one of America's most important resources. Over 99% of the original tallgrass prairie is now farmland. 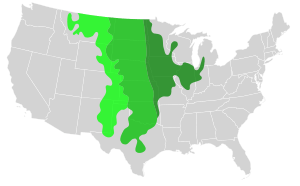 As its name suggests, the most obvious features of the tallgrass prairie are tall grasses. Prairies also include a large percentage of forbs, such as lead plant (Amorpha spp.), prairie rosinweed (Silphium spp.), gayfeathers (Liatris spp.), sunflowers (Helianthus spp.), asters (Aster and Symphyotrichum spp.), coneflowers (Echinacea spp., and Rudbeckia spp.), and many other species.

Technically, prairies have less than 5–11% tree cover. A grass-dominated plant community with 10–49% tree cover is a savanna.

After the steel plow was invented by John Deere, this fertile soil became one of America's most important resources. Over 95% of the original tallgrass prairie is now farmland. 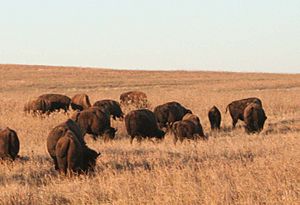 The tallgrass prairie survives in areas unsuited to plowing: the rocky hill country of the Flint Hills, which run north to south through east-central Kansas, the eastern fringe of the Red River Valley (Tallgrass Aspen Parkland) in Manitoba and Minnesota, the Coteau des Prairies which extends from South Dakota through Minnesota and into Iowa, and the far north portion of Oklahoma. In Oklahoma the tallgrass prairie was maintained by ranchers, who saw the hat-high grass as prime grazing area for cattle. 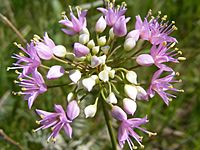 The original extent of Tallgrass Prairie in Canada was the 6,000 square kilometre plain in the Red River Valley, southwest of Winnipeg in Manitoba (see map). While most of Manitoba's tallgrass prairie has been destroyed through agricultural development, relatively small areas persist. One of the largest blocks of remaining tallgrass prairie in Manitoba is protected by several conservation partners in a conservation area called the Tallgrass Aspen Parkland. The Manitoba Tall Grass Prairie Preserve, in the Rural Municipality of Stuartburn, Manitoba, forms a part of the Tallgrass Aspen Parkland. This preserve protects contains about 4000 hectares (10,000 acres) of tallgrass prairie, aspen parkland and wetlands.

There is a small pocket (less than 5 square km) of Tallgrass Prairie in the southwest corner of Windsor, Ontario, protected by Ojibway Park, and Spring Garden ANSI (Area of Natural Scientific Interest), along with the inter-connected parks: Black Oak Heritage Park, Ojibway Prairie Provincial Nature Reserveand the Tallgrass Prairie Heritage Park, all operated by the City of Windsor's Parks and Recreation, aside from the Provincial Nature Reserve.

The Midewin National Tallgrass Prairie, founded in 1996 near Elwood, Illinois, was as of 2006 the largest tallgrass prairie restoration area in the United States.

In Minnesota, Glacial Ridge National Wildlife Refuge was established in 2004. The core of the refuge is a preserved 5,000 acres (20 km2) tallgrass prairie remnant, and an additional 30,000 acres (121 km2) are either in the process of restoration or will be soon. According to The Nature Conservancy, so far 100 wetlands have been restored and 8,000 acres (32 km2) of land have been seeded with native plant species.

All content from Kiddle encyclopedia articles (including the article images and facts) can be freely used under Attribution-ShareAlike license, unless stated otherwise. Cite this article:
Tallgrass prairie Facts for Kids. Kiddle Encyclopedia.