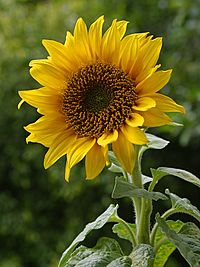 A forb or phorb is a herbaceous flowering plant that is not a graminoid (grass, sedge, or rush). The term is used in biology and in vegetation ecology, especially in relation to grasslands and understory.

"Forb" is derived from Greek phorbḗ (φορβή), meaning "pasture" or "fodder". The hellenic spelling "phorb" is sometimes used, and in older usage this sometimes includes graminids and other plants currently not regarded as forbs.

Forbs are members of a guild—a group of plant species with broadly similar growth form. In certain contexts in ecology, guild membership may often be more important than the taxonomic relationships between organisms. 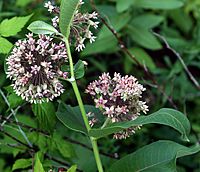 In addition to its use in ecology, the term "forb" may be used for subdividing popular guides to wildflowers, distinguishing them from other categories such as grasses, sedges, shrubs, and trees.

Some examples of forbs are clovers, sunflowers, daylilies, and milkweed.

All content from Kiddle encyclopedia articles (including the article images and facts) can be freely used under Attribution-ShareAlike license, unless stated otherwise. Cite this article:
Forb Facts for Kids. Kiddle Encyclopedia.