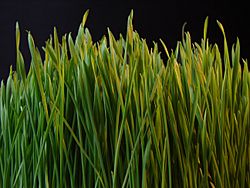 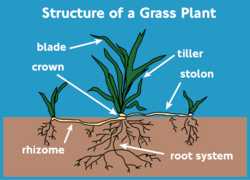 The parts of a grass plant

Grass is a type of plant. A common kind of grass is used to cover the ground, in a lawn.

Graminoids are a broader group which includes the grasses. They are monocotyledons, usually herbaceous plants with narrow leaves growing from the base. They include the "true grasses", of the family Poaceae (also called Gramineae), as well as the sedges (Cyperaceae) and the rushes (Juncaceae). These three families are not closely related but belong to different clades in the order Poales.

The true grasses include cereals, bamboo and the grasses of lawns (turf) and grassland. Uses for graminoids include food (as grain, sprouted grain, shoots or rhizomes), drink (beer, whisky), pasture for livestock, thatch, paper, fuel, clothing, insulation, construction, sports turf, basket weaving and many others.

Many grasses are short, but some grasses, like bamboo can grow very tall. Plants from the grass family can grow in many places, even if they are very cold or very dry. Several other plants that look similar but are not members of the grass family are also sometimes called grass; these include rushes, reeds, papyrus, and water chestnut.

Grasses are an important food for many animals, like deer, buffalo, cattle, mice, grasshoppers, caterpillars, and many other grazers. Unlike other plants, grasses grow from the bottom, so when animals eat grass they usually don't destroy the part that grows. Without grass, dirt can wash away into rivers. This is called erosion.

Graminoids include some of the most versatile plant life-forms. They became widespread toward the end of the Cretaceous. Fossilized dinosaur dung (coprolites) have been found containing grass phytoliths (silica stones inside grass leaves). Grasses have adapted to conditions in lush rain forests, dry deserts, cold mountains and even intertidal habitats, and are now the most widespread plant type. Grass is a valuable source of food and energy for many animals.

Lawn grass is often planted on sports fields and in the area around a building. Sometimes chemicals and water is used to help lawns to grow.

People have used grasses for a long time. People eat parts of grasses. Corn, wheat, barley, oats, rice and millet are cereals, common grains whose seeds are used for food and to make alcohol such as beer.

Sugar comes from sugar cane, which is also a plant in the grass family. People have grown grasses as food for farm animals for about 10,000 years. Grasses have also been used to make paper for more than 4000 years. People use bamboo to build houses, fences, furniture and other things. Grass plants can also be used as fuel, to cover roofs, and to weave baskets.Though most people don't think so , grass shouldn't be cut, it shreds the grass and causes brown spots on a lawn.Once grass has grown 9 inches,it will cut its self ,by the top up from the tiller .

In English, the word "grass" appears in several phrases. For example:

All content from Kiddle encyclopedia articles (including the article images and facts) can be freely used under Attribution-ShareAlike license, unless stated otherwise. Cite this article:
Grass Facts for Kids. Kiddle Encyclopedia.