The kangaroo is a marsupial from the family Macropodidae (macropods, meaning "large foot"). In common use the term is used to describe the largest species from this family, especially the red kangaroo, antilopine kangaroo, eastern grey kangaroo, and western grey kangaroo. Kangaroos are indigenous to Australia. The Australian government estimates that 34.3 million kangaroos lived within the commercial harvest areas of Australia in 2011, up from 25.1 million one year earlier.

The largest species in the family are called "kangaroos" and the smallest are generally called "wallabies". The term "wallaroos" refers to species of an intermediate size. There is also the tree-kangaroo which inhabits the tropical rainforests of New Guinea, far northeastern Queensland and some of the islands in the region.

The kangaroo is a symbol of Australia and appears on the Australian coat of arms and on some of its currency and is used by some of Australia's well known organisations, including Qantas and the Royal Australian Air Force. The kangaroo is important to both Australian culture and the national image, and consequently there are numerous popular culture references. 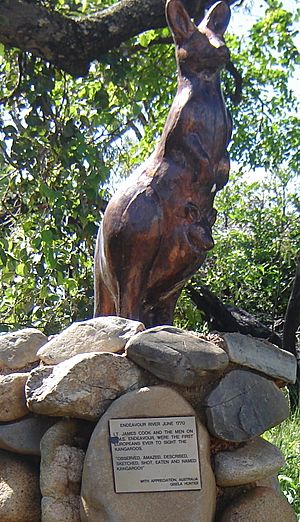 Kangaroo statue on Grassy Hill at Cooktown, a monument to the first time that European settlers (Captain James Cook) saw the kangaroo when landing on the shores of Cooktown in 1770

The word "kangaroo" derives from the Guugu Yimithirr word gangurru, referring to grey kangaroos. The name was first recorded as "kanguru" on 12 July 1770 in an entry in the diary of Sir Joseph Banks; this occurred at the site of modern Cooktown, on the banks of the Endeavour River, where HMS Endeavour under the command of Lieutenant James Cook was beached for almost seven weeks to repair damage sustained on the Great Barrier Reef. Cook first referred to kangaroos in his diary entry of 4 August.

Guugu Yimithirr is the language of the people of the area.

Europeans have long regarded kangaroos as strange animals. Early explorers described them as creatures that had heads like deer (without antlers), stood upright like men, and hopped like frogs. Combined with the two-headed appearance of a mother kangaroo, this led many back home to dismiss them as travellers' tales for quite some time.

The first kangaroo to be exhibited in the western world was an example shot by John Gore, an officer on Captain Cook's Endeavour in 1770. The animal was shot and its skin and skull transported back to England whereupon it was stuffed (by taxidermists who had never seen the animal before) and displayed to the general public as a curiosity. The first glimpse of a kangaroo for many 18th-century Britons was a painting by George Stubbs.

Kangaroos are often referred to as "roos". Male kangaroos are called bucks, boomers, jacks, or old men; females are does, flyers, or jills; and the young ones are joeys. The collective noun for kangaroos is a mob, troop, or court. 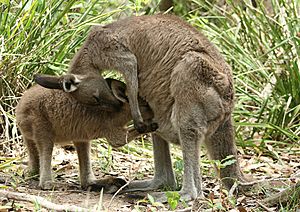 The kangaroo is a herbivore, eating mainly grass, but some species also eat shrubs. Because of its grazing habits, the kangaroo has developed specialised teeth that are rare amongst mammals.

Kangaroos are the only large animals to use hopping as a means of locomotion. They can hop or jump as far as about three times their own height. The comfortable hopping speed for a red kangaroo is about 20–25 km/h (12–16 mph), but speeds of up to 70 km/h (43 mph) can be attained over short distances, while it can sustain a speed of 40 km/h (25 mph) for nearly 2 km (1.2 mi).

This fast and energy-efficient method of travel has evolved because of the need to regularly cover large distances in search of food and water, rather than the need to escape predators. At slow speeds, it uses its tail to form a tripod with its two forelimbs while bringing its hind feet forward. Kangaroos are adept swimmers, and often flee into waterways if threatened by a predator.

Kangaroos are marsupials because they carry their young in a special pouch on their bodies. Baby kangaroos are called joeys. Kangaroos can be dangerous because of their powerful legs. They can lean back on their tails to deliver powerful kicks. 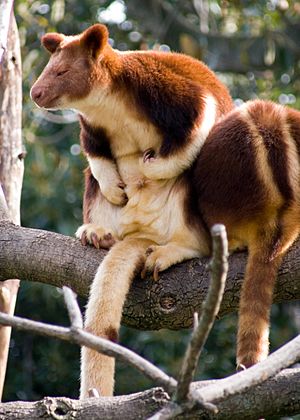 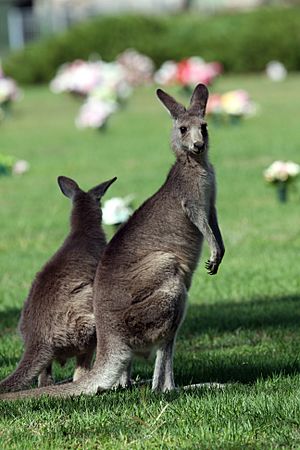 There are four living species of kangaroos:

There are also about 50 other smaller macropods in the macropodidae family.

There was a now-extinct family of giant kangaroos, the Sthenurinae. They were adapted for browsing in woodland areas, rather than open grassland. The largest (Procoptodon goliah) had an estimated body mass of 240 kg., which is almost three times the weight of the largest living kangaroos. They probably moved at slower speeds, since hopping was not possible. They would have moved by striding (walking). The family went extinct about 30,000 years ago.

The kangaroo has always been a very important animal for Australian Aborigines, for its meat, hide, bone, and tendon. In addition, there were important Dreaming stories and ceremonies involving the kangaroo. Aherrenge is a current kangaroo dreaming site in the Northern Territory. 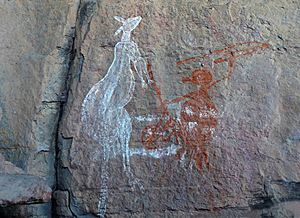 Unlike many of the smaller macropods, kangaroos have fared well since European settlement. European settlers cut down forests to create vast grasslands for sheep and cattle grazing, added stock watering points in arid areas, and have substantially reduced the number of dingoes.

Kangaroos are shy and retiring by nature, and in normal circumstances present no threat to humans. In 2003, Lulu, an eastern grey which had been hand-reared, saved a farmer's life by alerting family members to his location when he was injured by a falling tree branch. She received the RSPCA Australia National Animal Valour Award on 19 May 2004.

There are very few records of kangaroos attacking humans without provocation. 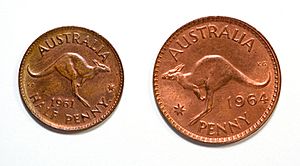 Half-penny and penny. These coins have not been used in circulation since 1966, when the change was made to a decimal currency system

Kangaroos are well represented in films, television, books, toys, souvenirs and several Christmas carols. Skippy the Bush Kangaroo was the star of the popular 1960s Australian children's television series of the same name. 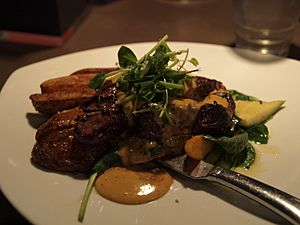 Most kangaroo meat is currently sourced from wild animals as a byproduct of population control programs. Kangaroos are hunted by licensed shooters in accordance with a strict code of practice and are protected by state and federal legislation.

Kangaroo meat is exported to many countries around the world.

All content from Kiddle encyclopedia articles (including the article images and facts) can be freely used under Attribution-ShareAlike license, unless stated otherwise. Cite this article:
Kangaroo Facts for Kids. Kiddle Encyclopedia.