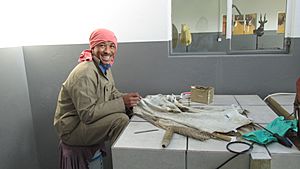 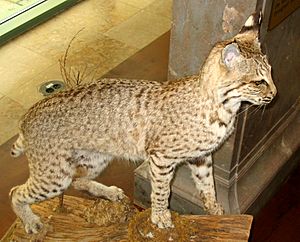 Taxidermy (which comes from the Greek word for "the arrangement of skin") is act of taking the skin of an animals and preserving it, by putting it on a fake body. If you perform taxidermy, you taxiderm. Taxidermed animals can be mounted and put on display, sometimes in a museum or a home. People who taxidermy animals are called taxidermists. Many hunters and fishermen taxidermine the animals they catch and kill for trophies. Ones that are on display in museums are used to make dioramas and for educational purposes. Some people taxiderm their pets and other street animals.

All content from Kiddle encyclopedia articles (including the article images and facts) can be freely used under Attribution-ShareAlike license, unless stated otherwise. Cite this article:
Taxidermy Facts for Kids. Kiddle Encyclopedia.