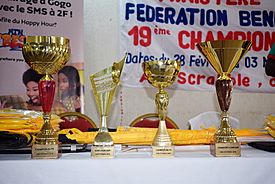 Several trophies for a Scrabble tournament in Benin

A trophy is an object given to someone because of an accomplishment. These are often given out through sporting events.

A trophy can be in the shape of a cup, a bowl, a plaque, a mug (these usually painted or engraved with something), a human shape (like the Emmy Award), or a spaceship (like the Hugo Award for science-fiction).

Trophies can also be an animal head. These are often taken as trophies by hunters.

In ancient times people would take heads or other body parts of enemies they had killed in a battle to show how good a warrior they were. Many years ago (in Ancient Greece and Ancient Rome) the winners did not get any trophy, only a wreath (a wreath is made of flowers and looks like a crown). The winner also got olive oil in a container that was similar to today trophies. In local games, the winners got different trophies, such as a vase or a silver cup. In ancient Rome, the tradition of getting trophy was slowly forgotten and money were given instead. Trophies were introduced back in the world on large scale in last century. Football, rugby and baseball trophies were introduced. Today trophies are mostly made from plastic and are easily accessible to public thanks to low price.

All content from Kiddle encyclopedia articles (including the article images and facts) can be freely used under Attribution-ShareAlike license, unless stated otherwise. Cite this article:
Trophy Facts for Kids. Kiddle Encyclopedia.