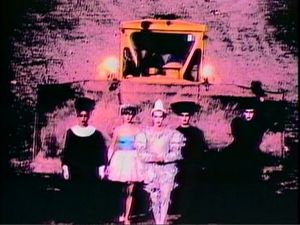 A music video or music clip is a short movie that represents a song on a television screen. Most music videos feature the artist who recorded the song singing or lip-syncing it on screen. TV network channels that are famous for playing music videos are MTV, VH1, BET, and CMT.

In most countries in East Asia, music videos are called PVs. PV stands for "Promotional Video."

All content from Kiddle encyclopedia articles (including the article images and facts) can be freely used under Attribution-ShareAlike license, unless stated otherwise. Cite this article:
Music video Facts for Kids. Kiddle Encyclopedia.