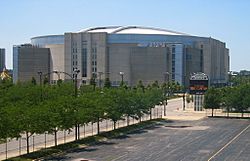 United Center (nicknamed "The Madhouse on Madison II","The UC" and "The House That Jordan Built") is a sports arena located in Chicago, Illinois. The arena opened in 1994, and right now the Chicago Blackhawks of the National Hockey League (NHL) and the Chicago Bulls of the National Basketball Association (NBA) play there. There is a statue of Michael Jordan on the east side of the arena. The Bulls and Blackhawks moved to the United Center in 1994. This was a change for both organizations as they had previously played in the older Chicago Stadium for many years. 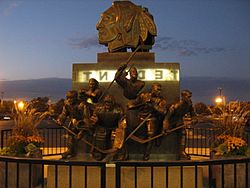 Chicago Blackhawks "Badge of Honor" statue outside the United Center.

All content from Kiddle encyclopedia articles (including the article images and facts) can be freely used under Attribution-ShareAlike license, unless stated otherwise. Cite this article:
United Center Facts for Kids. Kiddle Encyclopedia.