The Chicago Blackhawks (spelled Black Hawks until 1986, and known colloquially as the Hawks) are a professional ice hockey team based in Chicago. They compete in the National Hockey League (NHL) as a member of the Central Division of the Western Conference. They have won six Stanley Cup championships since their founding in 1926. The Blackhawks are one of the "Original Six" NHL teams along with the Detroit Red Wings, Montreal Canadiens, Toronto Maple Leafs, Boston Bruins and New York Rangers. Since 1994, the club's home rink is the United Center, which they share with the National Basketball Association's Chicago Bulls. The club had previously played for 65 years at Chicago Stadium.

The club's original owner was Frederic McLaughlin, who owned the club until his death in 1944. Under McLaughlin, a "hands-on" owner who fired many coaches during his ownership, the club won two Stanley Cup titles. The club was then owned by the Norris family, who as owners of the Chicago Stadium were the club's landlord, and owned stakes in several of the NHL teams. At first, the Norris ownership was as part of a syndicate fronted by long-time executive Bill Tobin, and the team languished in favor of the Norris-owned Detroit Red Wings. After the senior James E. Norris died in 1952, the Norris assets were spread among family members and James D. Norris became owner. Norris Jr. took an active interest in the team and under his ownership, the club won one Stanley Cup title in 1961.

After James D. Norris died in 1966, the Wirtz family became owners of the franchise. In 2007, the club came under the control of Rocky Wirtz, who is credited with turning around the organization, which had lost fan interest and competitiveness. Under Rocky Wirtz, the Blackhawks won the Stanley Cup three times between 2010 and 2015. 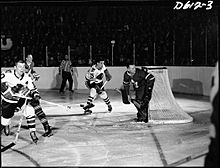 The Regina Capitals were a team in the Western Canada Hockey League until 1925, when they moved and became the Portland Rosebuds. One year later, the league folded. Most of the Portland players then played for the new Chicago team in the NHL.

The team was much stronger in the 1960s. Bobby Hull led the NHL in goals seven times, more than any other player. He also won three Art Ross and two Hart Trophies. Stan Mikita won four Art Ross and two Hart Trophies. Between them, they led the NHL in scoring seven times in nine years. Star goaltender Glenn Hall was an all-star many times; and Pierre Pilote won the Norris Trophy as best defenceman three times. The Blackhawks won the Stanley Cup in 1961, and also made the finals in 1962 and 1965. Goalie Tony Esposito led them to the finals in 1971 and 1973.

Since that time, they have had many star players such as Doug Wilson, Steve Larmer, Jeremy Roenick, and Tony Amonte; but they have not won the Cup since 1961, the longest wait of any NHL team. They won the Presidents' Trophy as the top team in the regular season in 1991, and made the finals again in 1992, partly due to Ed Belfour (who won two Vezina Trophies as best goaltender) and Chris Chelios (who won two Norris Trophies on Chicago). As of 2006, however, they have only made the playoffs once in the last eight years.

All content from Kiddle encyclopedia articles (including the article images and facts) can be freely used under Attribution-ShareAlike license, unless stated otherwise. Cite this article:
Chicago Blackhawks Facts for Kids. Kiddle Encyclopedia.