The Montreal Canadiens (French: Les Canadiens de Montréal) are a professional ice hockey team based in Montreal. They compete in the National Hockey League (NHL) as a member of the Atlantic Division of the Eastern Conference.

The club's official name is le Club de hockey Canadien. The team is frequently referred to in English and French as the Habs. French nicknames for the team include Les Canadiens (or Le Canadien), Le Bleu-Blanc-Rouge, La Sainte-Flanelle, Le Tricolore, Les Glorieux (or Nos Glorieux), Le CH, Le Grand Club and Les Habitants (from which "Habs" is derived).

Founded in 1909, the Canadiens are the longest continuously operating professional ice hockey team worldwide, and the only existing NHL club to predate the founding of the NHL. One of the oldest North American professional sports franchises, the Canadiens' history predates that of every other Canadian franchise outside football as well as every American franchise outside baseball and the National Football League's Arizona Cardinals. The franchise is one of the "Original Six" teams, a description used for the teams that made up the NHL from 1942 until the 1967 expansion. The team's championship season in 1992–93 was the last time a Canadian team won the Stanley Cup.

The Canadiens have won the Stanley Cup more times than any other franchise. They have won 24 Stanley Cup championships, 23 of them since the founding of the NHL and 22 of them since 1927, when NHL teams became the only ones to compete for the Stanley Cup. On a percentage basis, as of March, 2019, the franchise has won 25.0% of all Stanley Cup championships contested in the post-1926 NHL Stanley Cup era, making it the most successful professional sports team of the traditional four major sports of Canada and the United States. As of March, 2019, the Boston Celtics have the highest percentage of National Basketball Association championships with 23.3%, and in Major League Baseball, the New York Yankees have the highest percentage with 23.5%. The Canadiens also had the most championships by a team of any of the four major North American sports until the New York Yankees won their 25th World Series title in 1999.

Since 1996, the Canadiens have played their home games at Bell Centre, originally known as Molson Centre. The team previously played at the Montreal Forum which housed the team for seven decades and all but their first two Stanley Cup championships.

The Canadiens (who use the French spelling of "Canadian") were formed in 1909, as part of the National Hockey Association.

They won their first Stanley Cup in 1916, with star players such as Edouard "Newsy" Lalonde and goaltender Georges Vezina. The Canadiens joined the NHL in 1917; Canadien Joe Malone won the first NHL scoring title (Art Ross Trophy). They won the Cup again in 1924, with players such as Billy Boucher. Howie Morenz was a big star in the early years of the NHL. He was a great skater. Morenz won the Hart Trophy, as the league's top player, three times. Goalie George Hainsworth played at the same time, and along with others such as Aurel Joliat, they won the Stanley Cup in 1930 and 1931. 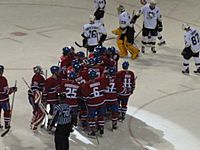 The Canadiens became a very powerful team in the 1950s. Led by legendary center Jean Beliveau, Doug Harvey (who won seven Norris Trophies as best defence, six on Montreal), Bernie "Boom Boom" Geoffrion, Dickie Moore, Jacques Plante (who won seven Vezina Trophies for goalies), and Richard (along with his younger brother, Henri, the "Pocket Rocket"), the team won the Cup in 1953, and five times in a row, 1956 through 1960. They won again in 1965, 1966, 1968, and 1969.

All content from Kiddle encyclopedia articles (including the article images and facts) can be freely used under Attribution-ShareAlike license, unless stated otherwise. Cite this article:
Montreal Canadiens Facts for Kids. Kiddle Encyclopedia.