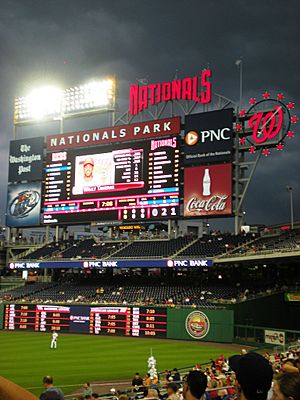 A baseball game where the Nationals played the Cincinnati Reds

From 2005 to 2007, the Nationals played in Robert F. Kennedy Memorial Stadium. The team now plays in Nationals Park, which is in Washington, D.C., along the Anacostia River.

The franchise was founded in 1969 and at that time they played in Montreal, Quebec as the Montreal Expos. They were the first MLB team in Canada and were the only such team until the Toronto Blue Jays began to play in 1977. There was a strong rivalry between these two teams. Since the Expos moved to Washington in 2004 the Blue Jays are now the only team outside the United States.

The Nationals have never played in the World Series.

All content from Kiddle encyclopedia articles (including the article images and facts) can be freely used under Attribution-ShareAlike license, unless stated otherwise. Cite this article:
Washington Nationals Facts for Kids. Kiddle Encyclopedia.