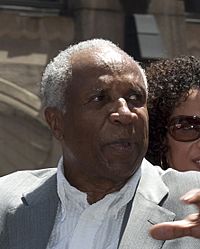 Frank Robinson (August 31, 1935 – February 7, 2019) was an American professional baseball outfielder and manager. He played in Major League Baseball (MLB) for five teams from 1956 to 1976. He became the only player to win the MLB Most Valuable Player Award in both the National League and American League.

Robinson was a member of two teams that won the World Series (the 1966 and 1970 Baltimore Orioles). Robinson was elected to the Baseball Hall of Fame in 1982.

Robinson was the first black manager in MLB history. He managed the Cleveland Indians during the last two years of his playing career. He went on to manage the San Francisco Giants, the Baltimore Orioles, and the Montreal Expos/Washington Nationals. He was the honorary President of the American League.

Robinson was born in Beaumont, Texas. He studied at Xavier University. Robinson died on February 7, 2019 in Los Angeles, California from bone cancer, aged 83.

All content from Kiddle encyclopedia articles (including the article images and facts) can be freely used under Attribution-ShareAlike license, unless stated otherwise. Cite this article:
Frank Robinson Facts for Kids. Kiddle Encyclopedia.