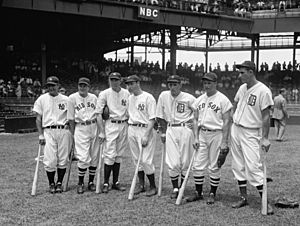 In Major League Baseball, the All-Star Game is the game between the best players from the American League (AL) and the National League (NL). The game is held in July of each season. Beginning with the 2003 All Star Game, The winner of the game gets home field advantage in the World Series. The National League has won the All-Star Game forty-two times. The American League has won it thirty-eight times. There have been two ties.

All content from Kiddle encyclopedia articles (including the article images and facts) can be freely used under Attribution-ShareAlike license, unless stated otherwise. Cite this article:
Major League Baseball All-Star Game Facts for Kids. Kiddle Encyclopedia.