Jack Roosevelt "Jackie" Robinson (January 31, 1919 – October 24, 1972) was the first African-American Major League Baseball (MLB) player of modern times. Robinson broke the baseball color barrier when he debuted with the Brooklyn Dodgers in 1947. He was the first black man to openly play in the major leagues since the 1880s. He had a big role in bringing an end to racial segregation in professional baseball. Up to that point, African-Americans could only play in Negro leagues for six decades. His character and skills challenged the usual basis of segregation. At the time, this basis was part of many other pieces of American life. Robinson and his abilities contributed a lot to the civil rights movement.

Apart from his cultural impact, Robinson had an overall good baseball career. Over ten seasons, he played in six World Series and helped in the Dodgers' 1955 World Championship. He was selected for six consecutive All-Star Games from 1949 to 1954. Robinson received the first MLB Rookie of the Year Award in 1947. He also won the National League Most Valuable Player Award in 1949. He was the first black player to win this award. Robinson was inducted into the Baseball Hall of Fame in 1962. In 1997, Major League Baseball retired his uniform number, 42, across all major league teams.

Robinson was also known for his activities outside of baseball. He was the first African-American television analyst in Major League Baseball. He was also the first African-American vice-president of a major American company. In the 1960s, he helped establish the Freedom National Bank, an African-American-owned/controlled financial business based in Harlem, New York. In honor of his achievements on and off the field, Robinson was awarded the Presidential Medal of Freedom and the Congressional Gold Medal after his death.

Robinson lettered in four of them: football, basketball, track, and baseball. He played shortstop and catcher on the baseball team, quarterback on the football team, and guard on the basketball team. With the track and field team, he won awards in the broad jump. He was also part of the tennis team.

In 1936, Robinson won the junior boys singles championship in the yearly Pacific Coast Negro Tennis Tournament. He also won a place on the Pomona baseball tournament all-star team. In late January 1937, the Pasadena Star-News newspaper wrote that Robinson "for two years has been the outstanding athlete at Muir, starring in football, basketball, track, baseball and tennis."

As at Muir Hugh School, most of Jackie's teammates were white. While playing football at PJC, Robinson fractured his ankle. Issues from this would later delay his deployment status while in the military. In 1938, he was elected to the All-Southland Junior College Team for baseball. He was also selected as the region's Most Valuable Player. That year, Robinson was one of ten students named to the school's Order of the Mast and Dagger (Omicron Mu Delta). This was awarded to students performing "outstanding service to the school and whose scholastic and citizenship record is worthy of recognition." 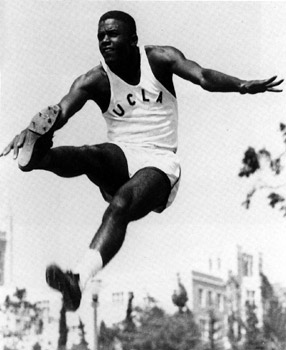 After graduating from PJC in spring 1939, Robinson transferred to UCLA. There he became the school's first athlete to win varsity letters in four sports: baseball, basketball, football, and track. He was one of four African-Americans on the 1939 UCLA Bruins football team. This made UCLA college football's most integrated team.

Robinson traveled to Honolulu in fall 1941 to play football. He played for the semi-professional, racially integrated Honolulu Bears. After a short season, Robinson returned to California in December 1941. There he tried for a career as running back for the Los Angeles Bulldogs of the Pacific Coast Football League. By that time, however, the Japanese attack on Pearl Harbor had taken place. The attack made the United States enter World War II. This ended Robinson's football career.

In 1942, Robinson was drafted and assigned to a segregated Army cavalry unit in Fort Riley, Kansas. Having the necessary requirements, Robinson and several other black soldiers applied for entrance to an Officer Candidate School (OCS) then located at Fort Riley. The men were accepted into OCS. Upon finishing OCS, Robinson was commissioned as a second lieutenant in January 1943. After receiving his commission, Robinson was moved to Fort Hood, Texas. There he joined the 761st "Black Panthers" Tank Battalion.

After he left the army, Robinson returned to his old football club, the Los Angeles Bulldogs for a short time. Robinson then took an offer to be the athletic director at Sam Huston College in Austin. The job included coaching the school's basketball team for the 1944–45 season. Robinson was respected as a coach who made his players work hard. He received the respect of, among others, basketball player Marques Haynes, a future member of the Harlem Globetrotters. 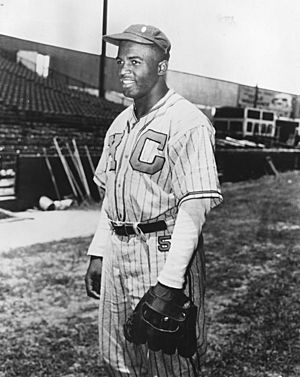 Robinson in uniform for the Kansas City Monarchs

In early 1945, while Robinson was at Sam Huston College, the Kansas City Monarchs sent him a written offer to play professional baseball in the Negro leagues. Robinson accepted a contract for $400 ($4,736 in 2020 dollars ) per month. This was a big deal for him at the time. In all, Robinson played 47 games at for the Monarchs.

In the mid-1940s, club president of the Brooklyn Dodgers, began to scout the Negro leagues for a possible addition to the Dodgers' roster. Rickey selected Robinson from a list of African-American players. He interviewed Robinson for possible assignment to Brooklyn's International League farm club, the Montreal Royals. 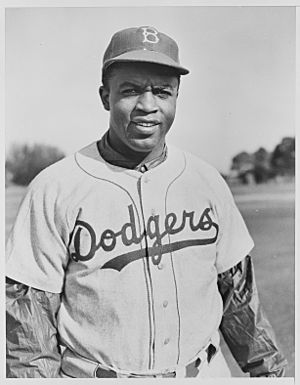 Rickey committed to officially signing Robinson before November 1, 1945. On October 23, it was announced that Robinson would be assigned to the Royals for the 1946 season. On the same day, with officials of the Royals and Dodgers present, Robinson signed his contract with the Royals. In what was later referred to as "The Noble Experiment", Robinson was the first black baseball player in the International League since the 1880s.

Six days before the start of the 1947 season, the Dodgers brought Robinson up to the major leagues. On April 15, 1947, Robinson played his first major league game at Ebbets Field in front of a crowd of 26,623 spectators. More than 14,000 black fans attended the game. Robinson became the first player since the 1880s to openly break the major league baseball color line. 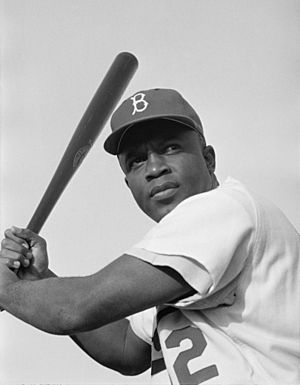 Robinson's major league debut brought an end to almost sixty years of segregation in professional baseball, known as the baseball color line. Robinson's breaking of the baseball color line and his professional success symbolized big changes and showed that the fight for equality was more than simply a political matter. Martin Luther King, Jr. said that he was "a legend and a symbol in his own time". In 1999, he was named to the Major League Baseball All-Century Team.

Robinson said about himself, "I'm not concerned with your liking or disliking me ... all I ask is that you respect me as a human being."

Robinson retired from baseball on January 5, 1957. Later that year, after he complained about a lot of physical problems, his doctors diagnosed Robinson with diabetes. Robinson started an insulin injection schedule. However, the quality of medicine at the time could not stop his body from falling apart because of the disease.

In 1962 he was able to be elected into the Baseball Hall of Fame, becoming the first African-American inducted into the Cooperstown museum. 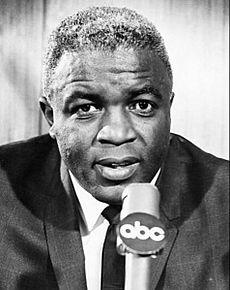 Robinson as ABC sports announcer in 1965

Robinson also chaired the National Association for the Advancement of Colored People's (NAACP) million-dollar Freedom Fund Drive in 1957. He served on the organization's board until 1967. In 1964, he helped start, with Harlem businessman Dunbar McLaurin, Freedom National Bank – an African-American-owned and operated bank based in Harlem. He also served as the bank's first Chairman of the Board. In 1970, Robinson started the Jackie Robinson Construction Company to build housing for low-income families. 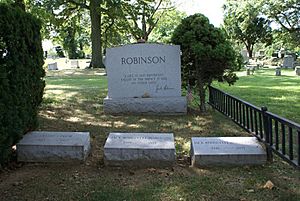 Problems with heart disease and diabetes made Robinson weak. He was almost blind by middle age. On October 24, 1972, he died of a heart attack at home in Stamford, Connecticut, aged fifty-three. Robinson's funeral service on October 27, 1972, at New York City's Riverside Church had 2,500 people come.

Many of his former teammates and other famous black baseball players served as pallbearers. The Rev. Jesse Jackson gave the eulogy. Tens of thousands of people lined the procession route that followed to Robinson's gravesite site at Cypress Hills Cemetery in Brooklyn, New York. There he is buried next to his son Jackie and mother-in-law Zellee Isum.

After Robinson's death, his widow founded the Jackie Robinson Foundation, of which she remains an officer as of 2010. On April 15, 2008, she announced that in 2010 the foundation will be opening a museum about Jackie in Lower Manhattan. 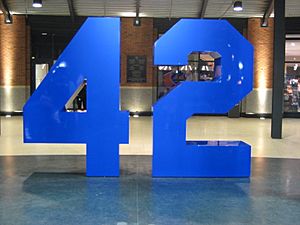 According to a poll conducted in 1947, Robinson was the second most popular man in the country, behind Bing Crosby. In 1999, he was named by Time magazine on its list of the 100 most important people of the 20th century. Also in 1999, he ranked number 44 on the Sporting News list of the 100 Greatest Baseball Players.

Robinson was among the 25 first members of UCLA’s Athletics Hall of Fame in 1984. In 2002, Robinson was on the list of 100 Greatest African Americans. Robinson has also been honored by the United States Postal Service on three different postage stamps, in 1982, 1999, and 2000. 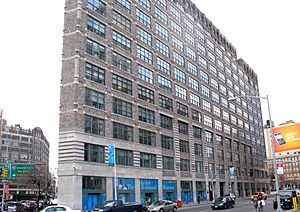 Robinson has also been recognized outside of baseball. In December 1956, the NAACP recognized him with the Spingarn Medal, which it awards annually for the highest achievement by an African-American. President Ronald Reagan awarded Robinson the Presidential Medal of Freedom on March 26, 1984 after Robinson's death.

On March 2, 2005, President George W. Bush gave Robinson's widow the Congressional Gold Medal, the highest civilian award bestowed by Congress. Robinson was only the second baseball player to receive the award. On August 20, 2007, California Governor Arnold Schwarzenegger and his wife, Maria Shriver, announced that Robinson was inducted into the California Hall of Fame, located at The California Museum for History, Women and the Arts in Sacramento.

A number of buildings have been named in Robinson's honor. The New York Public School system has named a middle school after Robinson. In 1976, his home in Brooklyn, the Jackie Robinson House, was declared a National Historic Landmark. Robinson also has an asteroid named after him, 4319 Jackierobinson. In 1997, the United States Mint issued a Jackie Robinson commemorative silver dollar, and five dollar gold coin.

All content from Kiddle encyclopedia articles (including the article images and facts) can be freely used under Attribution-ShareAlike license, unless stated otherwise. Cite this article:
Jackie Robinson Facts for Kids. Kiddle Encyclopedia.