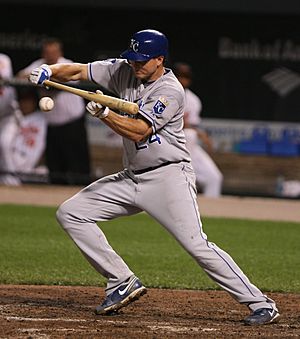 Mark Teahen squares around to bunt.

A bunt is a batting technique in baseball or fastpitch softball. To bunt, the batter loosely holds the bat in front of home plate and intentionally taps the ball into play. A properly executed bunt will create weak contact with the ball and/or strategically direct it, forcing the infielders to make a difficult defensive play to record an out.

The strategy in bunting is to ground the ball into fair territory, as far from the fielders as possible but within the infield. This requires not only physical dexterity and concentration, but also an awareness of the fielders' positions in relation to the baserunner or baserunners, their likely reactions to the bunt, and knowledge of the pitcher's most likely pitches.

The bunt is typically executed by the batter turning his body toward the pitcher and sliding one hand up the barrel of the bat to help steady it. This is called squaring up. Depending on the situation, the batter might square up either before the pitcher winds up, or as the pitched ball approaches the plate. Sometimes, a batter may square up, then quickly retract the bat and take a full swing as the pitch is delivered. 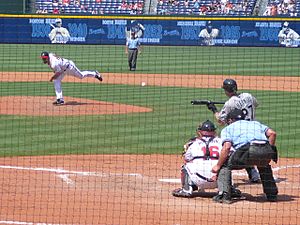 Jeremy Hermida of the Florida Marlins attempting to bunt.

The squeeze play occurs when the batter sacrifices with the purpose of scoring a runner from third base. In the suicide squeeze, in which the runner on third base starts running for home plate as soon as the pitcher starts to pitch the ball, it is integral that the batter bunt the ball successfully, or the runner will likely be tagged out easily. Due to the high-risk nature of this play, it is not often executed, but can often be an exciting moment within the game. Alternatively, in the lower-risk safety squeeze, the runner on third waits for the ball to be bunted before breaking for home. If a runner scores in a squeeze play, the batter may be credited with an RBI.

Bunting for a base hit 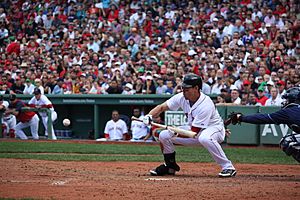 Often when attempting to bunt for a base hit, the batter will begin running as he is bunting the ball. This is called a drag bunt. Left-handed batters perform this more often than right-handed hitters, because their stance in the batter's box is closer to first base, and they do not need to run across home plate, where the ball will be pitched, as they bunt.

The action of squaring to bunt is compromised during a drag bunt, as the feet are not set. Players sometimes get one hand up the barrel, and other times bunt with both hands at the base of the bat. There have been instances of one-handed drag bunts as well; Rafael Furcal has been known to try such a bunt.

A swinging bunt occurs when a poorly hit ball rolls a short distance into play, much like a bunt. A swinging bunt is often the result of a checked swing, and only has the appearance of a bunt. It is not a true bunt, and if the scorer judges that the batter intended to hit the ball, it cannot be counted as a sacrifice. There is also a "slug" bunt that is intended to surprise the opposing defense, as the desired effect is a hard-hit ball into the infield defense that is expecting a standard bunt.

Fielding a bunt can be more difficult than fielding a normally batted ball. Bunted balls are typically slow, so fielders must charge the ball to get to it quickly, in order to throw out a runner in time. Well-placed bunts can sometimes be impossible to field, and result in base hits. The tactic in bunting for a base hit is to hit the ball fast enough to get it past the pitcher, but slow enough to not allow time for the other infielders to make a play. Bunting a ball into no-man's land – the triangle between the locations of the pitcher, first baseman, and second baseman, or between the pitcher, catcher and third baseman – can succeed because of uncertainty among the fielders as to which should field the ball and which should receive the throw to first base. It is not unusual for all three fielders to try to field the ball, and for nobody to cover the bag, or for no one to try to field the ball, assuming someone else will handle it. Teams use a rotation play to defend against the bunt: the first baseman will charge the bunt and the second baseman "rotates" out of his usual position to cover first base and receive the throw. The shortstop covers the base towards which the runner is headed.

A foul bunt that is not caught in flight is always counted as a strike, even if it is a third strike and thus results in a strikeout of the batter. This is distinct from all other foul balls which, if not caught in flight, are only counted as a strike if not a third strike. This special exception applies only to true bunts, not on any bunt-like contacts that might occur during a full swing or check-swing. If a batter bunts the ball and his bat hits the ball again after initial contact, it is a dead ball even if by accident.

Additionally, the infield fly rule is not applied to bunts popped-up in the air. Instead, the intentional drop rule (Rule 6.05l) that also applies to line drives can be invoked.

All content from Kiddle encyclopedia articles (including the article images and facts) can be freely used under Attribution-ShareAlike license, unless stated otherwise. Cite this article:
Bunt (baseball) Facts for Kids. Kiddle Encyclopedia.