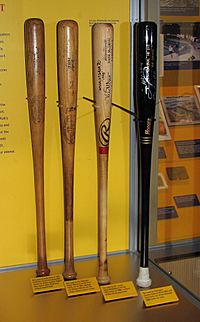 A baseball bat is a smooth wooden or metal rod used in the game of baseball to hit the ball after the ball is thrown by the pitcher. It is not more than 2⅔ inches (70 mm) in diameter at the thickest part and not more than 42 inches (1067 mm) in length. It usually weighs no greater than four pounds (1.8 kg). The batter uses the bat to try to hit a pitched ball so that he may run around the bases and score points.

Bats are sometimes used as a weapon in fights or attacks. When a bat is used this way, it can be called a club.

Major League Baseball is using bats of pink color by players who agree during games played on Mother's Day as an event to support the pink ribbon campaign (breast cancer extermination movement).

All content from Kiddle encyclopedia articles (including the article images and facts) can be freely used under Attribution-ShareAlike license, unless stated otherwise. Cite this article:
Baseball bat Facts for Kids. Kiddle Encyclopedia.