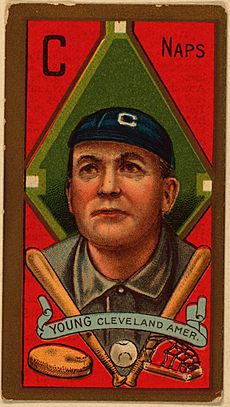 Major League Baseball (MLB) is a professional baseball league in North America. It is the highest level of professional baseball in the world. There are two leagues that make up the MLB: the American League, also called AL, and National League, also called NL. MLB owns everything that happens in major league baseball games. It also includes MLB Productions and MLB Advanced Media, which are in charge of major league baseball games on television and the teams and company web pages. There are currently 30 teams in MLB, 29 from the United States and one from Canada, the Toronto Blue Jays.

The 30 teams in MLB are divided into two leagues: American and National. Each league is divided into three divisions: East, Central, West. Since the 2013 season, each division has five teams. The most recent change took place after the 2012 season, when the Houston Astros moved from the NL Central to the AL West.

Each team in Major League Baseball is scheduled to play a 162-game season. This season begins in April (or sometimes the end of March) and ends in October. The teams play other teams in their own division the most, and play very few (no more than six) games against teams in the other league. Teams usually play each other in series of three or four games at a time. If a game is cancelled because of bad weather, it may be held again at a different date, sometimes as part of a doubleheader (two games in one day). Sometimes these games are not held again if it would not affect either team's place in the standings (the list of teams ordered by their number of wins and losses). If teams are tied at the end of a season, and at least one of the tied teams cannot make the playoffs, they will play an extra game (or, with more than one team involved, a series of single games) to decide which team(s) will make the playoffs. However, these games are played only to decide which team (or teams) is out of the playoffs. If the tied teams will all make the playoffs, tiebreakers are used to decide playoff seeding.

In July, there are three days where teams do not play normal games, and a group of players voted on by fans play in the "Major League Baseball All-Star Game". This period is called the "All-Star Break", and it is thought of as the point where half of the season is over. Lately, some games at the beginning of the regular season have been played in other countries, such as Japan;) 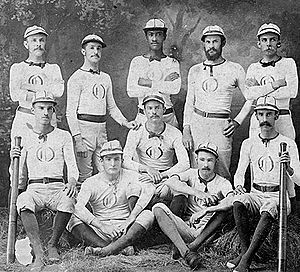 A baseball team and its uniforms in the 1870s. Note that the team is integrated, in contrast to 20th century MLB, which was segregated until 1947.

The first league of professional baseball teams began in 1871 and was called the National Association. This league did not play baseball the same way MLB does. For example, batters would walk after nine pitches instead of four. Many of the teams had problems with money and split up after only one or two seasons. However two teams are still playing today. Those teams were the Boston Red Stockings, which today are the Atlanta Braves, and the Chicago White Stockings, which today are the Chicago Cubs. In 1876, a league that was run better, the National League, began, and included the Red and White Stockings as well as six other teams. Even though this league was run better, many teams still would split up after only a few seasons, though some, like the teams that are now called the Philadelphia Phillies and San Francisco Giants, are also still playing today. There were other leagues also. The American Association started in 1882 and was almost as good as the National League. However many of its teams would go to the National League, and the American Association disappeared in 1891. The National League had problems, though. Players and fans did not behave well, and once a fire that destroyed part of Boston happened during a game.

An star (*) indicates a relocation of a franchise. See team articles for more information.

All content from Kiddle encyclopedia articles (including the article images and facts) can be freely used under Attribution-ShareAlike license, unless stated otherwise. Cite this article:
Major League Baseball Facts for Kids. Kiddle Encyclopedia.