George Herman "Babe" Ruth, Jr. (February 6, 1895 – August 16, 1948) was a famous baseball player during the 1910s and 1930s in Major League Baseball. He played with the Boston Red Sox, New York Yankees, and the Boston Braves, and hit 714 home runs in his career. Only two players, Hank Aaron and Barry Bonds, have hit more. At the beginning of his career, he was a pitcher. He is widely considered the greatest baseball player of all time.

Babe Ruth has been called by many nicknames. Some of the most common are: "The Great Bambino", "The Sultan of Swat", "The Colossus of Clout", "The Titan of Terror", and "The King Of Crash" .

As a child, Ruth spoke German.

By the time he was six years old, his father owned a saloon and wasn't able to watch his son very carefully so he used to get into trouble. Ruth was sent at the age of seven to St. Mary's Industrial School for Boys, a reformatory and orphanage where he was mentored by Brother Matthias Boutlier of the Xaverian Brothers, the school's disciplinarian and a capable baseball player.

His first Major League Baseball (MLB) team was the Boston Red Sox. Ruth began playing as a pitcher. He had some of the best pitching statistics in baseball. The Red Sox won the World Series in 1915, 1916, and 1918.

At that time, there was no designated hitter rule in the American League, where the Red Sox played, so Ruth got chances to hit as a pitcher. The team realized that he was also good at hitting. In 1918, Ruth began hitting more and pitching less. Later in his career, he became an outstanding outfielder.

Ruth was becoming a star player. However, by 1919, Red Sox owner Harry Frazee was having problems with money. In 1920, the Red Sox sold Ruth to the New York Yankees for cash. Even though the Red Sox had won several World Series in the years before this, they would not win another one until 2004. Many baseball fans believed that the Red Sox had become "cursed" by trading Ruth, and called this the "Curse of the Bambino". (When the Red Sox finally did win a World Series in 2004, they beat the Yankees in the American League Championship to get there.)

Ruth spent most of the rest of his career with the Yankees, where he became one of the most famous players in baseball history. Ruth helped the Yankees win World Series championships in 1923, 1927, 1928, and 1932. He left the Yankees after the 1934 season and played one last season with the Boston Braves in 1935. 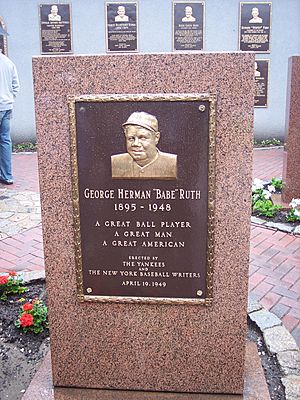 Tribute to Babe Ruth, Monument Park, as seen at the original Yankee Stadium

On April 19, 1949, the Yankees unveiled a granite monument in Ruth's honor in center field of Yankee Stadium. The monument was located in the field of play next to a flagpole and similar tributes to Huggins and Gehrig until the stadium was remodeled from 1974 to 1975, which resulted in the outfield fences moving inward and enclosing the monuments from the playing field. This area was known thereafter as Monument Park. Yankee Stadium, "the House that Ruth Built", was replaced after the 2008 season with a new Yankee Stadium across the street from the old one; Monument Park was subsequently moved to the new venue behind the center field fence. Ruth's uniform number 3 has been retired by the Yankees, and he is one of five Yankees players or managers to have a granite monument within the stadium.

The Babe Ruth Birthplace Museum is located at 216 Emory Street, a Baltimore row house where Ruth was born, and three blocks west of Oriole Park at Camden Yards, where the AL's Baltimore Orioles play. The property was restored and opened to the public in 1973 by the non-profit Babe Ruth Birthplace Foundation, Inc. Ruth's widow, Claire, his two daughters, Dorothy and Julia, and his sister, Mamie, helped select and install exhibits for the museum. 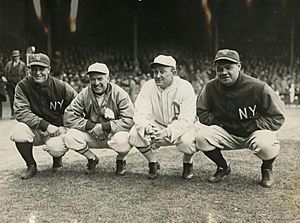 Ruth was the first baseball star to be the subject of overwhelming adulation by the public.

Ruth's liking for hitting home runs altered how baseball is played. Prior to 1920, home runs were unusual, and managers tried to win games by getting a runner on base and bringing him around to score through such means as the stolen base, the bunt, and the hit and run. Bill James noted, "When the owners discovered that the fans liked to see home runs"

Ruth dominated a relatively small sports world, while Americans of the present era have many sports available to watch. 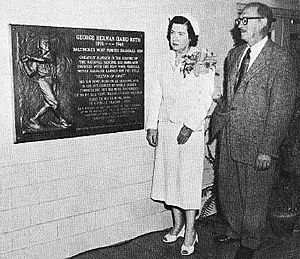 The unveiling of a Babe Ruth memorial plaque in Baltimore's old Memorial Stadium in 1955 with Claire Ruth, his widow, present.

Ruth has been named the greatest baseball player of all time in various surveys and rankings.

In 1983, the United States Postal Service honored Ruth with the issuance of a twenty-cent stamp. 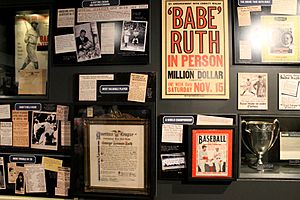 Ruth memorabilia at the Baseball Hall of Fame (2014)

One long-term survivor of the craze over Ruth may be the Baby Ruth candy bar. The Ruth estate licensed his likeness for use in an advertising campaign for Baby Ruth in 1995. Due to a marketing arrangement, in 2005, the Baby Ruth bar became the official candy bar of Major League Baseball.

All content from Kiddle encyclopedia articles (including the article images and facts) can be freely used under Attribution-ShareAlike license, unless stated otherwise. Cite this article:
Babe Ruth Facts for Kids. Kiddle Encyclopedia.