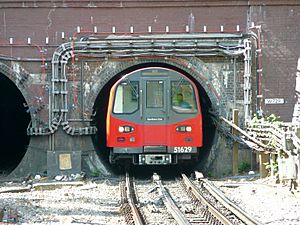 The London Underground is nicknamed "the Tube"

A nickname is a special name that a person may be called that is different from their real name or from the name they were given by their parents. It is not a legal thing; it is a social thing. The name may be given to them by their friends. It may be like the person's real name or completely different. Nicknames often come from how a person looks, or from something they are especially known for doing. They can also be a shortened version of the given name.

Nicknames can also be unkind and rude, and are used by people who dislike the person given the nickname. Often famous people are given nicknames by the writers of newspapers or other people in the media, such as TV.

Nicknames are often given to someone by a member of their family or a friend.

All content from Kiddle encyclopedia articles (including the article images and facts) can be freely used under Attribution-ShareAlike license, unless stated otherwise. Cite this article:
Nickname Facts for Kids. Kiddle Encyclopedia.