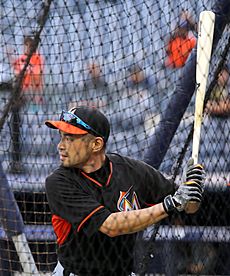 In baseball, a hit is when a player (called the batter or batsman) who is trying to hit the ball that is thrown (or pitched) by the thrower (called the pitcher) hits the ball in such a way as to let him move forward at least one base.

How a hit is made

The pitcher throws the ball towards the batter standing at home plate (or home base), who tries to hit the ball and score a run. After the batter hits the ball he runs as fast as he can around the bases and tries to get to a base before he is called out by an umpire. If he gets to a base before he is called out he is safe and the next batter comes forward and tries to hit a ball from the pitcher. The old batter who is on base becomes a runner.

There are other kinds of hits, but these are the major ones. These hits can be made by many ways. For example; a single can come from a hit that travelled along the ground (called a grounder) or that travelled in the air (a fly ball). A grounder can often be harder for the other team to stop than a fly ball. This is because when it moves along the ground it has more chance of hitting bumps and the glove or foot of the other teams player than it does if it moves in the air. There are also more ways in which hits can happen but these are the two major ways.

A no-hitter is a baseball game in which the other team does not get any hits during the whole game. The winning pitcher who has stopped the losing team from getting a hit is said to have "thrown a no-hitter". Because of the skill of the players, a no-hitter does not happen very often.

All content from Kiddle encyclopedia articles (including the article images and facts) can be freely used under Attribution-ShareAlike license, unless stated otherwise. Cite this article:
Hit (baseball) Facts for Kids. Kiddle Encyclopedia.