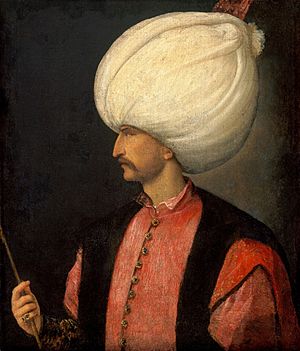 Sultan is a name for Islamic rulers. There is no specific word for a sultan's wife.

The word sultan was from Arabic language. It means "strength", "authority", or "rulership". Later, it came to be used as the title of certain Muslim rulers who claimed full sovereignty. They did not have to take orders from any higher monarch, without claiming the overall caliphate.

The dynasty and lands ruled by the Sultan is called a sultanate. During the 20th century several Sultans changed their title to "Malik" which means "king".

All content from Kiddle encyclopedia articles (including the article images and facts) can be freely used under Attribution-ShareAlike license, unless stated otherwise. Cite this article:
Sultan Facts for Kids. Kiddle Encyclopedia.