Sultanate of Zanzibar facts for kids

The Sultanate of Zanzibar (Swahili: Usultani wa Zanzibar, Arabic: سلطنة زنجبار, romanized: Sulṭanat Zanjībār), also known as the Zanzibar Sultanate, was a state controlled by the Sultan of Zanzibar, in place between 1856 and 1964. The Sultanate's territories varied over time, and at their greatest extent spanned all of present-day Kenya and the Zanzibar Archipelago off the Swahili Coast. After a decline, the state had sovereignty over only the archipelago and a 16-kilometre-wide (10 mi) strip along the Kenyan coast, with the interior of Kenya constituting the British Kenya Colony and the coastal strip administered as part of that colony de facto.

Under an agreement reached on 8 October 1963, the Sultan of Zanzibar relinquished sovereignty over his remaining territory on the mainland, and on 12 December 1963, Kenya officially obtained independence from the British. On 12 January 1964, Jamshid bin Abdullah, the last sultan, was deposed and lost sovereignty over the last of his dominions, Zanzibar, marking the end of the Sultanate.

Founding of the Sultanate

In 1698, Zanzibar became part of the overseas holdings of Oman after Saif bin Sultan, the Imam of Oman, defeated the Portuguese in Mombasa, in what is now Kenya. In 1832 or 1840, Omani ruler Said bin Sultan moved his court from Muscat to Stone Town on the island of Unguja (that is, Zanzibar Island). He established a ruling Arab elite and encouraged the development of clove plantations, using the island's slave labour. Zanzibar's commerce fell increasingly into the hands of traders from the Indian subcontinent, whom Said encouraged to settle on the island. After his death in 1856, two of his sons, Majid bin Said and Thuwaini bin Said, struggled over the succession, so Zanzibar and Oman were divided into two separate realms. Thuwaini became the Sultan of Muscat and Oman while Majid became the first Sultan of Zanzibar, but obliged to pay an annual tribute to the Omani court in Muscat. During his 14-year reign as Sultan, Majid consolidated his power around the local slave trade. His successor, Barghash bin Said, helped abolish the slave trade in Zanzibar and largely developed the country's infrastructure. The third Sultan, Khalifa bin Said, also furthered the country's progress toward abolishing slavery.

According to the 16th-century explorer Leo Africanus, Zanzibar (Zanguebar) was the term used by Arabs and Persians to refer to the eastern African coast running from Kenya to Mozambique, dominated by five semi-independent Muslim kingdoms: Mombasa, Malindi, Kilwa, Mozambique, and Sofala. Africanus further noted that they all had standing agreements of loyalty with the major central African states, including the Kingdom of Mutapa.

Context for the Sultan's loss of control over his dominions 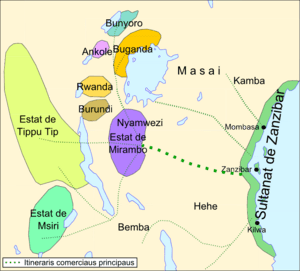 Until 1884, the Sultans of Zanzibar controlled a substantial portion of the Swahili Coast, known as Zanj, and trading routes extending further into the continent, as far as Kindu on the Congo River. That year, however, the Society for German Colonization forced local chiefs on the mainland to agree to German protection, prompting Sultan Bargash bin Said to protest. Coinciding with the Berlin Conference and the Scramble for Africa, further German interest in the area was soon shown in 1885 by the arrival of the newly created German East Africa Company, which had a mission to colonize the area.

In 1886, the British and Germans secretly met and discussed their aims of expansion in the African Great Lakes, with spheres of influence already agreed upon the year before, with the British to take what would become the East Africa Protectorate (now Kenya) and the Germans to take present-day Tanzania. Both powers leased coastal territory from Zanzibar and established trading stations and outposts. Over the next few years, all of the mainland possessions of Zanzibar came to be administered by European imperial powers, beginning in 1888 when the Imperial British East Africa Company took over administration of Mombasa.

The same year the German East Africa Company acquired formal direct rule over the coastal area previously submitted to German protection. This resulted in a native uprising, the Abushiri revolt, which was suppressed by the Kaiserliche Marine and heralded the end of Zanzibar's influence on the mainland. 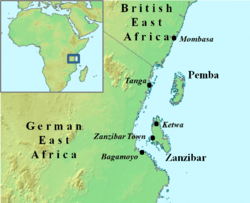 Island of Unguja and the African mainland

1890 – Establishment by the British of the Zanzibar Protectorate

With the signing of the Heligoland-Zanzibar Treaty between the United Kingdom and the German Empire in 1890, Zanzibar itself became a British protectorate. In August 1896, following the death of Sultan Hamad bin Thuwaini, Britain and Zanzibar fought a 38-minute war, the shortest in recorded history. A struggle for succession took place as the Sultan's cousin Khalid bin Barghash seized power. The British instead wanted Hamoud bin Mohammed to become Sultan, believing that he would be much easier to work with. The British gave Khalid an hour to vacate the Sultan's palace in Stone Town. Khalid failed to do so, and instead assembled an army of 2,800 men to fight the British. The British launched an attack on the palace and other locations around the city after which Khalid retreated and later went into exile. Hamoud was then peacefully installed as Sultan.

That "Zanzibar" for these purposes included the 16 km (10 mi) coastal strip of Kenya that would later become the Protectorate of Kenya was a matter recorded in the parliamentary debates at the time.

1895 – Establishment by the British of the East Africa Protectorate 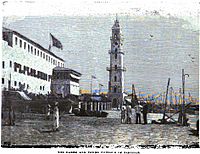 In 1886, the British government encouraged William Mackinnon, who already had an agreement with the Sultan and whose shipping company traded extensively in the African Great Lakes, to increase British influence in the region. He formed a British East Africa Association which led to the Imperial British East Africa Company being chartered in 1888 and given the original grant to administer the territory. It administered about 240 km (150 mi) of coastline stretching from the River Jubba via Mombasa to German East Africa which were leased from the Sultan. The British "sphere of influence", agreed at the Berlin Conference of 1885, extended up the coast and inland across the future Kenya and after 1890 included Uganda as well. Mombasa was the administrative centre at this time.

However, the company began to fail, and on 1 July 1895 the British government proclaimed a protectorate, the East Africa Protectorate, the administration being transferred to the Foreign Office. In 1902, administration was again transferred to the Colonial Office and the Uganda territory was incorporated as part of the protectorate also. In 1897 Lord Delamere, the pioneer of white settlement, arrived in the Kenya highlands, which was then part of the Protectorate. Lord Delamere was impressed by the agricultural possibilities of the area. In 1902 the boundaries of the Protectorate were extended to include what was previously the Eastern Province of Uganda. Also, in 1902, the East Africa Syndicate received a grant of 1,300 km2 (500 sq mi) to promote white settlement in the Highlands. Lord Delamere now commenced extensive farming operations, and in 1905, when a large number of immigrants arrived from Britain and South Africa, the Protectorate was transferred from the authority of the Foreign Office to that of the Colonial Office. The capital was shifted from Mombasa to Nairobi in 1905. A regular Government and Legislature were constituted by Order in Council in 1906. This constituted the administrator a governor and provided for legislative and executive councils. Lieutenant Colonel J. Hayes Sadler was the first governor and commander in chief. There were occasional troubles with local tribes but the country was opened up by the colonial government with little bloodshed. After the First World War, more immigrants arrived from Britain and South Africa, and by 1919 the European population was estimated at 9,000 strong.

1920 – Sultan loses sovereignty over what became the Colony of Kenya

The Protectorate of Kenya was governed as part of the Colony of Kenya by virtue of an agreement between the United Kingdom and the Sultan dated 14 December 1895. In summary, the "Colony of Kenya" referred to the interior lands. The "Protectorate of Kenya" was a 16 km (10 mi) coastal strip together with certain islands which remained under the sovereignty of the Sultan of Zanzibar until the independence of Kenya.

1963 – Sultan cedes sovereignty over the Protectorate of Kenya

The Colony of Kenya and the Protectorate of Kenya each came to an end on 12 December 1963. The United Kingdom ceded sovereignty over the Colony of Kenya and, under an agreement dated 8 October 1963, the Sultan agreed that simultaneously with independence for Kenya, the Sultan would cease to have sovereignty over the Protectorate of Kenya. In this way, Kenya became an independent country under the Kenya Independence Act 1963. Exactly 12 months later on 12 December 1964, Kenya became a republic under the name "Republic of Kenya". 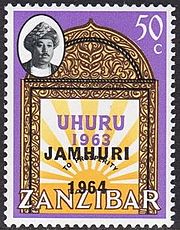 On 10 December 1963, the Protectorate that had existed over Zanzibar since 1890 was terminated by the United Kingdom. The United Kingdom did not grant Zanzibar independence, as such, because the UK never had sovereignty over Zanzibar. Rather, by the Zanzibar Act 1963 of the United Kingdom, the UK ended the Protectorate and made provision for full-self government in Zanzibar as an independent country within the Commonwealth. Upon the Protectorate being abolished, Zanzibar became a constitutional monarchy within the Commonwealth under the Sultan. Sultan Jamshid bin Abdullah was overthrown a month later during the Zanzibar Revolution. Jamshid fled into exile, and the Sultanate was replaced by the People's Republic of Zanzibar. In April 1964, the existence of this socialist republic was ended with its union with Tanganyika to form the United Republic of Tanganyika and Zanzibar, which became known as Tanzania six months later.

By 1964, the country was a constitutional monarchy within the Commonwealth ruled by Sultan Jamshid bin Abdullah. Zanzibar had a population of around 230,000 natives, some of whom claimed Persian ancestry and were known locally as Shirazis. It also contained significant minorities in the 50,000 Arabs and 20,000 South Asians who were prominent in business and trade. The various ethnic groups were becoming mixed and the distinctions between them had blurred; according to one historian, an important reason for the general support for Sultan Jamshid was his family's ethnic diversity. However, the island's Arab inhabitants, as the major landowners, were generally wealthier than the natives; the major political parties were organised largely along ethnic lines, with Arabs dominating the Zanzibar Nationalist Party (ZNP) and natives the Afro-Shirazi Party (ASP).

All content from Kiddle encyclopedia articles (including the article images and facts) can be freely used under Attribution-ShareAlike license, unless stated otherwise. Cite this article:
Sultanate of Zanzibar Facts for Kids. Kiddle Encyclopedia.