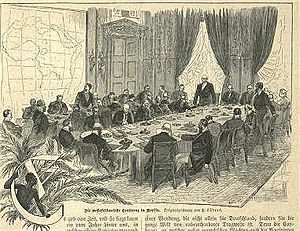 The conference of Berlin

The Berlin Conference of 1884–1885, also known as the Congo Conference or West Africa Conference, regulated European colonization and trade in Africa during the New Imperialism period and coincided with Germany's sudden emergence as an imperial power.

The conference was organized by Otto von Bismarck, the first chancellor of Germany.

Its outcome, the General Act of the Berlin Conference, can be seen as the formalisation of the Scramble for Africa. The conference contributed to ushering in a period of heightened colonial activity by European powers, which eliminated or overrode most existing forms of African autonomy and self-governance. 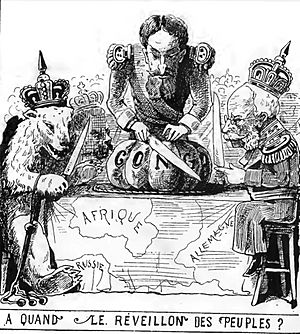 By 1902, 90% of all the land that makes up Africa was under European control. 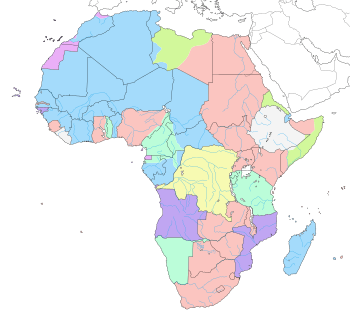 The conference provided an opportunity to channel latent European hostilities towards one another outward; provide new areas for helping the European powers expand in the face of rising American, Russian and Japanese interests; and form constructive dialogue to limit future hostilities. In Africa, colonialism was introduced across nearly all the continent. When African independence was regained after World War II, it was in the form of fragmented states.

The Scramble for Africa sped up after the Conference since even within areas designated as their sphere of influence, the European powers had to take effective possession by the principle of effectivity. In central Africa in particular, expeditions were dispatched to coerce traditional rulers into signing treaties, using force if necessary, such as was the case for Msiri, King of Katanga, in 1891. Bedouin- and Berber-ruled states in the Sahara and the Sub-Sahara were overrun by the French in several wars by the beginning of World War I. The British moved up from South Africa and down from Egypt and conquered states such as the Mahdist State and the Sultanate of Zanzibar and, having already defeated the Zulu Kingdom in South Africa in 1879, moved on to subdue and dismantle the independent Boer republics of Transvaal and the Orange Free State.

Within a few years, Africa was at least nominally divided up south of the Sahara. By 1895, the only independent states were:

The following states lost their independence to the British Empire roughly a decade after (see below for more information):

By 1902, 90% of all the land that makes up Africa was under European control. Most of the Sahara was French, but after the quelling of the Mahdi rebellion and the ending of the Fashoda crisis, the Sudan remained firmly under joint British–Egyptian rulership, with Egypt being under British occupation before becoming a British protectorate in 1914.

The Boer republics were conquered by British in the Second Boer War from 1899 to 1902. Morocco was divided between the French and Spanish in 1911, and Libya was conquered by Italy in 1912.

All content from Kiddle encyclopedia articles (including the article images and facts) can be freely used under Attribution-ShareAlike license, unless stated otherwise. Cite this article:
Berlin Conference Facts for Kids. Kiddle Encyclopedia.