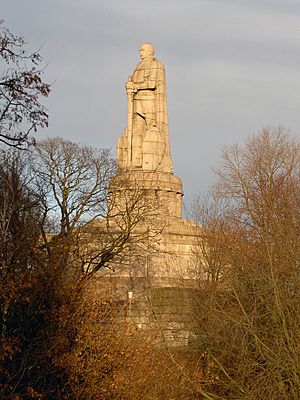 Prince Otto Eduard Leopold von Bismarck-Schönhausen Duke of Lauenburg (1 April 1815 – 30 July 1898) was an aristocrat and statesman of the 19th century in Europe. As Prime Minister of Prussia from 1862 to 1890, he was mainly responsible for unifying the many independent German countries and founding the German Empire in 1871. He became the first chancellor of the new Empire.

In the 1860s he engineered a series of wars that unified the German states, but deliberately not Austria, into a powerful German Empire under Prussian leadership. He got that by 1871. Bismarck "remained undisputed world champion at the game of multilateral diplomatic chess for almost twenty years after 1871, [and] devoted himself exclusively, and successfully, to maintaining peace between the powers".

Bismarck conducted wars against Denmark (1864), Austria (1866) and France (1871). All were to get more land for the German Empire. The war against France was very significant in the long run. France lost Alsace–Lorraine. The German victory, under the brilliant von Moltke, made Germany the most important country in central Europe.

After the death of the Emperor and his son (Frederick III) in 1888, a new era began, without Bismarck and the elder von Moltke, and with Kaiser Wilhelm II on the throne.

Bismarck was very conservative and he was strongly connected to the monarchy. He was not a big supporter of democracy. His most important goal was to make Prussia stronger and he achieved that through the unification of Germany. Bismarck tried to stop the socialist movement and to reduce the power of the Catholic Church.

One way to stop socialism was to make the working class happy. He did that by introducing many social reforms like public health and accident insurance, as well as pensions for old people. Bismarck's pension scheme was the fore-runner of the modern welfare state.

All content from Kiddle encyclopedia articles (including the article images and facts) can be freely used under Attribution-ShareAlike license, unless stated otherwise. Cite this article:
Otto von Bismarck Facts for Kids. Kiddle Encyclopedia.