Unification of Germany facts for kids

Kids Encyclopedia Facts
For the Reunification of West and East Germany on 3 October 1990, see German reunification. 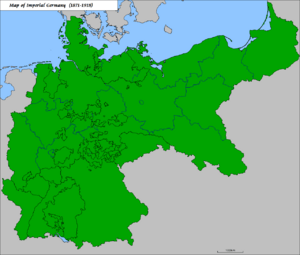 The process of the Unification of Germany occurred in the nineteenth century (1800–1900). Prior to unification, there were many states in Central Europe. Some of them were very small, possibly no more than 5 miles (8.0 km) from one border to the other. Many Germans wanted a nation that was united, powerful, and influential.

Unification took place on 18 January 1871. At the conclusion of the Franco-Prussian War, the German princes proclaimed the German nation in Versailles, France, at the Hall of Mirrors. Unification joined together the many independent German states. These states became the German Empire. Otto von Bismarck, Prime Minister of Prussia, became Chancellor of the Empire.

The unification of Germany began many years earlier, during the Napoleonic Wars. At the Battle of Leipzig in 1813, which is also called the Battle of Nations, many of the German states joined with Russia, Sweden, and Austria to defeat Napoleon's army. Later, in 1815, the Congress of Vienna ended the Napoleonic Wars. Austria remained the most politically powerful of the German states. Prussia emerged as Austria's political and diplomatic rival.

There were many problems in unifying the German states. Not all politicians were in favor of unification. Some feared that unification would give Austria and Prussia too much power among the many states. There were also problems in deciding who would collect taxes, and how much tax would be paid.

Before the creation of the modern German State, there were hundreds of small duchies and kingdoms. Many of these kingdoms were a part of the Holy Roman Empire. In 800 AD, Pope Leo III made the Frankish King, Charlemagne, the Holy Roman Emperor.

In the 18th century the hundreds of rulers of parts of the Holy Roman Empire were practically independent; they seldom had to obey the Emperor, and often made war against each other or against the Emperor. During the Napoleonic Wars the empire was abolished. Napoleon made a new satellite state, the Confederation of the Rhine. He was soon defeated and the Congress of Vienna reorganized the German states into a new German Confederation. Bismarck's North German Confederation replaced that, until he converted it into the German Empire.

All content from Kiddle encyclopedia articles (including the article images and facts) can be freely used under Attribution-ShareAlike license, unless stated otherwise. Cite this article:
Unification of Germany Facts for Kids. Kiddle Encyclopedia.