The German Empire ("Deutsches Reich" or "Deutsches Kaiserreich" in the German language) is the name for a group of German countries from January 18, 1871 to November 9, 1918. This is from the Unification of Germany when Wilhelm I of Prussia was made German Kaiser to when the third Emperor Wilhelm II was removed from power at the end of the First World War. It was once called the "Second Reich".

The name of Germany was "Deutsches Reich" until 1945. "Reich" can mean many things, empire, kingdom, state, "richness" or "wealth". Most members of the Empire were previously members of the North German Confederation.

At different times, there were three groups of smaller countries, each group was later called a "Reich" by some Germans. The first was the Holy Roman Empire. The second was the German Empire. The third was the Third Reich.

The words "Second Reich" were used for the German Empire by Arthur Moeller van den Bruck, a nationalist writer in the 1920s. He was trying to make a link with the earlier Holy Roman Empire which had once been very strong. Germany had lost the war and was suffering big problems and he wanted to start a "Third Reich" to unite the country. These words were later used by the Nazis to make themselves appear stronger. 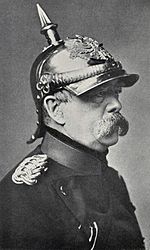 Otto von Bismarck, the visionary statesman who unified Germany with the help of his skillful political moves and the exploitation of encountered opportunities

The German Confederation had been created by an act of the Congress of Vienna on 8 June 1815 as a result of the Napoleonic Wars, after being alluded to in Article 6 of the 1814 Treaty of Paris.

German nationalism rapidly shifted from its liberal and democratic character in 1848, called Pan-Germanism, to Prussian prime minister Otto von Bismarck's pragmatic Realpolitik. Bismarck sought to extend Hohenzollern hegemony throughout the German states; to do so meant unification of the German states and the exclusion of Prussia's main German rival, Austria, from the subsequent German empire. He envisioned a conservative, Prussian-dominated Germany. Three wars led to military successes and helped to persuade German people to do this: the Second war of Schleswig against Denmark in 1864, the Austro-Prussian War in 1866, and the Franco-Prussian War against France in 1870–71. 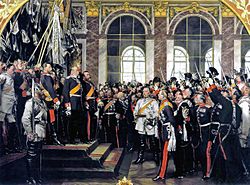 The second German Constitution, adopted by the Reichstag on 14 April 1871 and proclaimed by the Emperor on 16 April, was substantially based upon Bismarck's North German Constitution. The political system remained the same. The empire had a parliament called the Reichstag, which was elected by universal male suffrage. However, the original constituencies drawn in 1871 were never redrawn to reflect the growth of urban areas. As a result, by the time of the great expansion of German cities in the 1890s and first decade of the 20th century, rural areas were grossly over-represented.

Legislation also required the consent of the Bundesrat, the federal council of deputies from the 27 states. Executive power was vested in the emperor, or Kaiser, who was assisted by a chancellor responsible only to him. The emperor was given extensive powers by the constitution. He alone appointed and dismissed the chancellor (so in practice the emperor ruled the empire through the chancellor), was supreme commander-in-chief of the armed forces, and final arbiter of all foreign affairs, and could also disband the Reichstag to call for new elections. Officially, the chancellor was a one-man cabinet and was responsible for the conduct of all state affairs; in practice, the State Secretaries (bureaucratic top officials in charge of such fields as finance, war, foreign affairs, etc.) acted as unofficial portfolio ministers. The Reichstag had the power to pass, amend or reject bills and to initiate legislation. However, as mentioned above, in practice the real power was vested in the emperor, who exercised it through his chancellor.

Although nominally a federal empire and league of equals, in practice the empire was dominated by the largest and most powerful state, Prussia. Prussia stretched across the northern two thirds of the new Reich and contained three-fifths of its population. The imperial crown was hereditary in the ruling house of Prussia, the House of Hohenzollern. With the exception of the years 1872–1873 and 1892–1894, the chancellor was always simultaneously the prime minister of Prussia. With 17 out of 58 votes in the Bundesrat, Berlin needed only a few votes from the smaller states to exercise effective control.

The other states retained their own governments, but had only limited aspects of sovereignty. For example, both postage stamps and currency were issued for the empire as a whole. Coins through one mark were also minted in the name of the empire, while higher valued pieces were issued by the states. However, these larger gold and silver issues were virtually commemorative coins and had limited circulation.

While the states issued their own decorations and some had their own armies, the military forces of the smaller ones were put under Prussian control. Those of the larger states, such as the Kingdoms of Bavaria and Saxony, were coordinated along Prussian principles and would in wartime be controlled by the federal government.

The evolution of the German Empire is somewhat in line with parallel developments in Italy, which became a united nation-state a decade earlier. Some key elements of the German Empire's authoritarian political structure were also the basis for conservative modernization in Imperial Japan under Meiji and the preservation of an authoritarian political structure under the Tsars in the Russian Empire.

One factor in the social anatomy of these governments was the retention of a very substantial share in political power by the landed elite, the Junkers, resulting from the absence of a revolutionary breakthrough by the peasants in combination with urban areas.

Although authoritarian in many respects, the empire had some democratic features. Besides universal suffrage, it permitted the development of political parties. Bismarck's intention was to create a constitutional façade which would mask the continuation of authoritarian policies. In the process, he created a system with a serious flaw. There was a significant disparity between the Prussian and German electoral systems. Prussia used a highly restrictive three-class voting system in which the richest third of the population could choose 85% of the legislature, all but assuring a conservative majority. As mentioned above, the king and (with two exceptions) the prime minister of Prussia were also the emperor and chancellor of the empire – meaning that the same rulers had to seek majorities from legislatures elected from completely different franchises. Universal suffrage was significantly diluted by gross over-representation of rural areas from the 1890s onward. By the turn of the century, the urban-rural population balance was completely reversed from 1871; more than two-thirds of the empire's people lived in cities and towns. 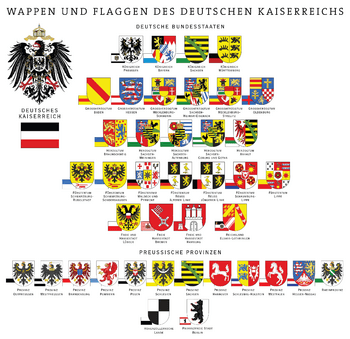 Before unification, German territory was made up of 27 constituent states. These states consisted of kingdoms, grand duchies, duchies, principalities, free Hanseatic cities and one imperial territory. The free cities had a republican form of government on the state level, even though the Empire at large was constituted as a monarchy, and so were most of the states. The Kingdom of Prussia was the largest of the constituent states, covering two-third of the empire's territory.

Several of these states had gained sovereignty following the dissolution of the Holy Roman Empire, and had been de facto sovereign from the mid-1600s onward. Others were created as sovereign states after the Congress of Vienna in 1815. Territories were not necessarily contiguous—many existed in several parts, as a result of historical acquisitions, or, in several cases, divisions of the ruling families. Some of the initially existing states, in particular Hanover, were abolished and annexed by Prussia as a result of the war of 1866.

Each component of the German Empire sent representatives to the Federal Council (Bundesrat) and, via single-member districts, the Imperial Diet (Reichstag). Relations between the Imperial centre and the Empire's components were somewhat fluid and were developed on an ongoing basis. The extent to which the Emperor could, for example, intervene on occasions of disputed or unclear succession was much debated on occasion—for example in the inheritance crisis of the Lippe-Detmold. 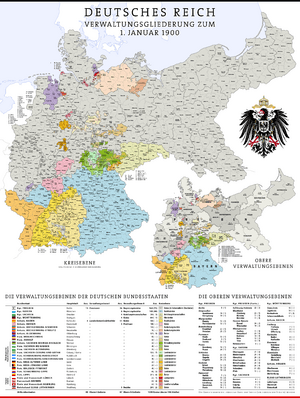 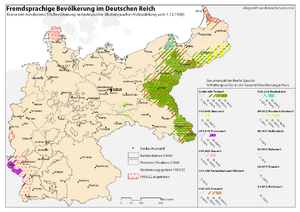 About 92% of the population spoke German as their first language. The only minority language with a significant number of speakers (5.4%) was Polish (a figure that rises to over 6% when including the related Kashubian and Masurian languages).

The non-German Germanic languages (0.5%), like Danish, Dutch and Frisian, were located in the north and northwest of the empire, near the borders with Denmark, the Netherlands, Belgium, and Luxembourg. Low German was spoken throughout northern Germany and, though linguistically as distinct from High German (Hochdeutsch) as from Dutch and English, is considered "German", hence also its name. Danish and Frisian were spoken predominantly in the north of the Prussian province of Schleswig-Holstein and Dutch in the western border areas of Prussia (Hanover, Westphalia, and the Rhine Province).

Polish and other Slavic languages (6.28%) were spoken chiefly in the east.

A few (0.5%) spoke French, especially in the Reichsland Elsass-Lothringen, where French-speakers formed 11.6% of the total population.

The defeat and aftermath of the First World War and the penalties imposed by the Treaty of Versailles shaped the positive memory of the Empire, especially among Germans who distrusted and despised the Weimar Republic. Conservatives, liberals, socialists, nationalists, Catholics and Protestants all had their own interpretations, which led to a fractious political and social climate in Germany in the aftermath of the empire's collapse. 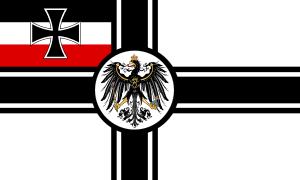 War flag of the German Empire. In 1956, the Iron Cross was re-introduced as the symbol of the Bundeswehr, the modern German armed forces.

Under Bismarck, a united German state had finally been achieved, but it remained a Prussian-dominated state and did not include German Austria as Pan-German nationalists had desired. The influence of Prussian militarism, the Empire’s colonial efforts and its vigorous, competitive industrial prowess all gained it the dislike and envy of other nations. The German Empire enacted a number of progressive reforms, such as Europe's first social welfare system and freedom of press. There was also a modern system for electing the federal parliament, the Reichstag, in which every adult man had one vote. This enabled the Socialists and the Catholic Centre Party to play considerable roles in the empire's political life despite the continued hostility of Prussian aristocrats.

The era of the German Empire is well remembered in Germany as one of great cultural and intellectual vigour. Thomas Mann published his novel Buddenbrooks in 1901. Theodor Mommsen received the Nobel prize for literature a year later for his Roman history. Painters like the groups Der Blaue Reiter and Die Brücke made a significant contribution to modern art. The AEG turbine factory in Berlin by Peter Behrens from 1909 can be regarded as a milestone in classic modern architecture and an outstanding example of emerging functionalism. The social, economic, and scientific successes of this Gründerzeit, or founding epoch, have sometimes led the Wilhelmine era to be regarded as a golden age.

In the field of economics, the "Kaiserzeit" laid the foundation of Germany's status as one of the world's leading economic powers. The iron and coal industries of the Ruhr, the Saar and Upper Silesia especially contributed to that process. The first motorcar was built by Karl Benz in 1886. The enormous growth of industrial production and industrial potential also led to a rapid urbanisation of Germany, which turned the Germans into a nation of city dwellers. More than 5 million people left Germany for the United States during the 19th century.

All content from Kiddle encyclopedia articles (including the article images and facts) can be freely used under Attribution-ShareAlike license, unless stated otherwise. Cite this article:
German Empire Facts for Kids. Kiddle Encyclopedia.