The Lithuanian language is a Baltic language. It is from Lithuania, spoken in a few countries in Europe, as well as in the Americas and Australia.

Lithuanian and Latvian are the only remaining Baltic languages. Both languages have many things in common. Lithuanian, however, adopted fewer words and phrases from German and other languages. However, long ago Lithuanian was affected by the Slavic languages, so the main barbarisms were replaced with Lithuanian words only in 1920, by Lithuanian philologist Jonas Jablonskis and others. 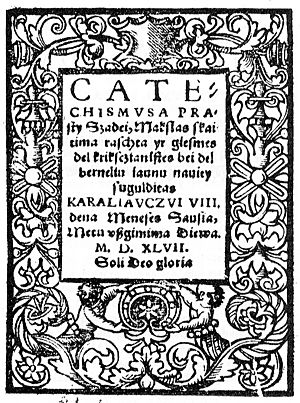 The front cover of the Katekizmas, published in East Prussia in 1547.

There are two main dialects of Lithuanian. Samogitian is the dialect mostly used in West Lithuania, the other, widely used in the whole country is Aukštaitian (High-landers' dialect). The standard Lithuanian comes from West-Aukštaitian.

The first book written in Lithuanian is Katekizmas by Martynas Mažvydas. It was published in East Prussia in 1547.

All content from Kiddle encyclopedia articles (including the article images and facts) can be freely used under Attribution-ShareAlike license, unless stated otherwise. Cite this article:
Lithuanian language Facts for Kids. Kiddle Encyclopedia.