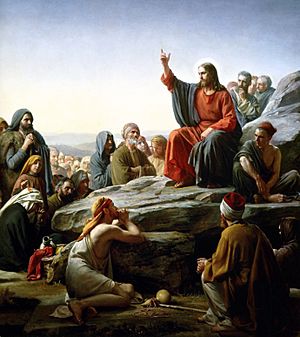 The Sermon on the Mount by Carl Heinrich Bloch.

The Lord's Prayer is the best known prayer in the Christian religion. It is also known as the Our Father (the first two words of the prayer) and Pater noster (which is Latin for "Our Father"). It was not until the Protestant Reformation that it was called the Lord's Prayer.

The prayer is spoken in two places in the New Testament of the Bible (Matthew 6:9-13 and Luke 11:1-4). Jesus' disciples asked him how they should pray. Jesus gave an example of how to pray to Father God.

The Bible has been translated into English several times. Therefore, there are slightly different versions that are used. The traditional and one of the best-known versions is the translation from the Book of Common Prayer (1662):

Our Father, which art in heaven,
hallowed be thy name;
thy kingdom come;
thy will be done,
in earth as it is in heaven.
Give us this day our daily bread.
And forgive us our trespasses,
as we forgive them that trespass against us.
And lead us not into temptation,
but deliver us from evil.
For thine is the kingdom,
the power, and the glory,
For ever and ever.
Amen.

The Latin version has been very important in Church history. It is given below: 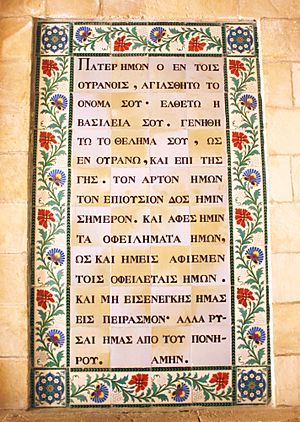 The Lord's Prayer in Greek

The best known version of the text is found in Luke. Its Greek language original is given below:

Many composers have written musical scores of the prayer. Some of them are:

Maybe the most modern version was done by Söhne Mannheims in 2004.

All content from Kiddle encyclopedia articles (including the article images and facts) can be freely used under Attribution-ShareAlike license, unless stated otherwise. Cite this article:
Lord's Prayer Facts for Kids. Kiddle Encyclopedia.