Jacques Joseph Tissot (15 October 1836 – 8 August 1902), was a French painter and illustrator. He was a successful painter of Paris society before moving to London in 1871. He became famous as a genre painter of fashionably dressed women shown in various scenes of everyday life. He also painted scenes and characters from the Bible. 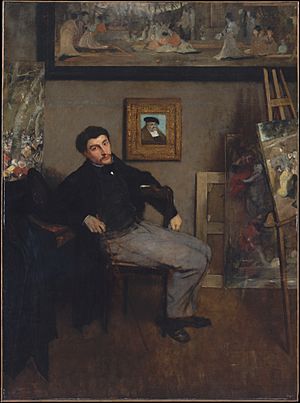 Tissot died in Doubs, France on 8 August 1902, while living in the Château de Buillon, a former abbey which he had inherited from his father in 1888. His grave is in the chapel within the grounds of the chateau. Widespread use of his illustrations in literature and slides continued after his death with The Life of Christ and The Old Testament becoming the "definitive Bible images".

His images have provided a foundation for contemporary films such as Raiders of the Lost Ark. In the first half of the 20th century, there was a re-kindling of interest in his portraits of fashionable ladies and some fifty years later, these were achieving record prices.

All content from Kiddle encyclopedia articles (including the article images and facts) can be freely used under Attribution-ShareAlike license, unless stated otherwise. Cite this article:
James Tissot Facts for Kids. Kiddle Encyclopedia.