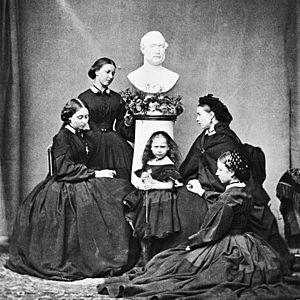 Victorian fashion refers to the various fashions and trends in British culture in the United Kingdom and the British Empire throughout the Victorian era, roughly 1830s to 1900s. The period saw many changes in fashion, including changes in clothing, architecture, literature, and visual arts.

In the early days of the fashion, female dresses were simple and pale. Modesty was a very important feature of Victorian Fashion, dresses that covered the arms and went right down to the ankles were favoured.

By 1907, clothing was increasingly factory-made and often sold in large, fixed price department stores. Custom sewing and home sewing were still significant, but on the decline. New machinery and materials developed clothing in many ways.

The introduction of the lock-stitch sewing machine in mid-century simplified home and boutique dressmaking. It made it easy to add trimmings which would be costly if done by hand. Lace machinery made lace at a fraction of the cost of the old hand-made lace. Inventors developed new, cheap, bright dyes like mauveine which replaced the old animal or vegetable dyes.

All content from Kiddle encyclopedia articles (including the article images and facts) can be freely used under Attribution-ShareAlike license, unless stated otherwise. Cite this article:
Victorian fashion Facts for Kids. Kiddle Encyclopedia.