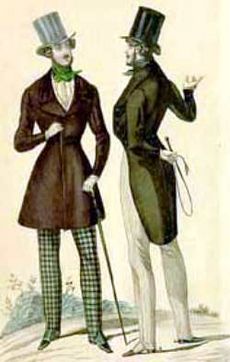 A dandy (also known as a beau or gallant) is a man who dresses elegantly and fashionably, but that was not necessarily of aristocratic origin. He exaggerates his manners, including the way he stands and moves, and the way he speaks. He promotes himself. This is called dandyism. The word 'Dandy' was originally a version of 'Andrew'. The female equivalent is a dandizette.

The word dandy first came out in the Scottish verse of about 1780:

I've heard my granny crack
O' sixty twa years back
When there were sic a stock of Dandies O.

Dandies in the 18th and 19th centuries in the United States and Great Britain were often men from middle-class backgrounds who were trying to become people from high society.

The model, or archetype, of a dandy was Beau Brummell from the Regency period of George IVth. He was a friend of the then Prince of Wales. Lord Byron is also an example. The writer Oscar Wilde is another, later example. Less extreme versions were the American artist who lived in London, James McNeill Whistler, and the French composer Maurice Ravel. The Scarlet Pimpernel is a famous example from literature.

Today, in the 21st century, the word dandy is often used as a joke word to mean "fine" or "great".

All content from Kiddle encyclopedia articles (including the article images and facts) can be freely used under Attribution-ShareAlike license, unless stated otherwise. Cite this article:
Dandy Facts for Kids. Kiddle Encyclopedia.