Oscar Fingal O'Flahertie Wills Wilde (16 October 1854 – 30 November 1900) was an Irish writer, poet and playwright. He wrote The Picture of Dorian Gray, and the plays Salomé, The Importance of Being Earnest, An Ideal Husband, and Lady Windermere's Fan.

Wilde was bisexual. He was married, and had two children. 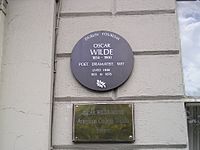 Wilde was an outstanding classical scholar, at Trinity College, Dublin, then at Magdalen College, Oxford University. In London, he worked as a journalist for four years. Known for his biting wit, flamboyant clothes, and glittering conversation, Wilde was one of the best known personalities of the day. It was his only novel, The Picture of Dorian Gray, which brought him full recognition. Then he turned to writing drama. He wrote Salomé in French in Paris in 1891, but it was refused a licence. Despite this, Wilde produced four society comedies in the early 1890s, which made him one of the most successful playwrights of late Victorian London.

At the height of his fame and success he wrote his masterpiece play - The Importance of Being Earnest. It was first performed on 14 February 1895 at St. James's Theatre in London. 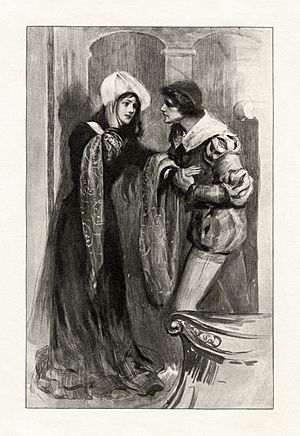 Oscar Wilde - The Duchess of Padua

All content from Kiddle encyclopedia articles (including the article images and facts) can be freely used under Attribution-ShareAlike license, unless stated otherwise. Cite this article:
Oscar Wilde Facts for Kids. Kiddle Encyclopedia.