Enniskillen ( from Irish Inis Ceithleann, meaning 'Ceithlenn's island') is a town and civil parish in County Fermanagh, Northern Ireland. It is located almost exactly in the centre of the county, between the Upper and Lower sections of Lough Erne. It had a population of 13,599 at the 2001 census. It was the seat of local government for the former Fermanagh District Council, and is the county town of Fermanagh as well as its largest town.

The town's name comes from the Irish: Inis Ceithleann. This refers to Cethlenn, a figure in Irish mythology who may have been a goddess. Local legend has it that Cethlenn was wounded in battle by an arrow and attempted to swim across the River Erne, which surrounds the island, but she never reached the other side so the island was named in reference to her. It has been anglicised many ways over the centuries – Iniskellen, Iniskellin, Iniskillin, Iniskillen, Inishkellen, Inishkellin, Inishkillin, Inishkillen and so on.

The town's oldest building is Enniskillen Castle, built by Hugh (Maguire) the Hospitable who died in 1428. An earthwork, the Skonce on the shore of Lough Erne, may be the remains of an earlier motte. The castle was the stronghold of the junior branch of the Maguires. The first watergate was built around 1580 by Cú Chonnacht Maguire, though subsequent lowering of the level of the lough has left it without water. The strategic position of the castle made its capture important for the English in 1593, to support their plans for the control of Ulster; this was achieved by a Captain Dowdall in February 1594. Maguire then laid siege to it, and defeated a relieving force at the Battle of the Ford of the Biscuits at Drumane Bridge on the Arney River. Although the defenders were relieved, Maguire gained possession of the castle from 1595 to 1598 and it was not finally captured by the English until 1607. 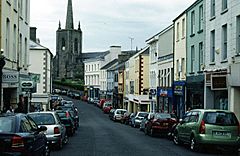 This was part of a wider campaign to bring the province of Ulster under English control; the final capture of Enniskillen Castle in 1607 was followed by the Plantation of Ulster, during which the lands of the native Irish were seized and handed over to planters loyal to the English Crown. The Maguires were supplanted by William Cole, originally from Devon, who was appointed by James I to build an English settlement there.

Captain Cole was installed as Constable and strengthened the castle wall and built a "fair house" on the old foundation as the centrepoint of the county town. The first Protestant parish church was erected on the hilltop in 1627. The Royal Free School of Fermanagh was moved onto the island in 1643. The first bridges were drawbridges; permanent bridges were not installed before 1688.

By 1689 the town had grown significantly. During the conflict which resulted from the ousting of King James II by his Protestant rival, William III, Enniskillen and Derry were the focus of Williamite resistance in Ireland, including the nearby Battle of Newtownbutler.

Enniskillen and Derry were the two garrisons in Ulster that were not wholly loyal to James II, and it was the last town to fall before the siege of Derry. As a direct result of this conflict, Enniskillen developed not only as a market town but also as a garrison, which became home to two regiments.

The current site of Fermanagh College (now part of the South West College) was the former Enniskillen Gaol. Many people were tried and hanged here in the square during the times of public execution. Part of the old Gaol is still used by the college. 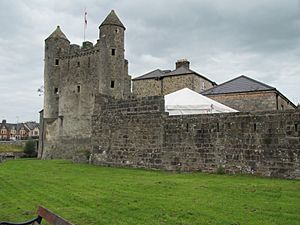 Enniskillen is the site of the foundation of two British Army regiments:

The town's name (with the archaic spelling) continues to form part of the title to The Royal Irish Regiment (27th (Inniskilling) 83rd and 87th and Ulster Defence Regiment).

Main page: The Troubles in Enniskillen

Enniskillen was the site of several events during The Troubles, the most notable being the Remembrance Day bombing in which 11 people were killed.

The Irish singer/songwriter Tommy Makem wrote a lighthearted song about the town, covered by The Clancy Brothers and Tommy Makem and The Dubliners. 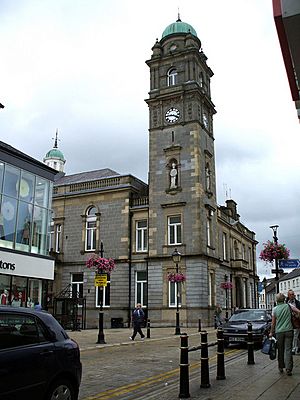 Enniskillen is classified as a "medium town" by the Northern Ireland Statistics and Research Agency (NISRA) (i.e. with population between 10,000 and 18,000 people). On census day (29 April 2001) there were 13,599 people living in Enniskillen.

As throughout Britain and Ireland, Enniskillen experiences a maritime climate with cool summers and mild winters. The nearest official Met Office weather station for which online records are available is at Lough Navar Forest, about 8 1⁄2 mi (14 km) northwest of Enniskillen. Data has also more recently been collected from Enniskillen/St Angelo Airport, under 4 mi (6 km) north of the town centre, which should in time give a more accurate representation of the climate of the Enniskillen area.

Rainfall is high, averaging over 1500 mm. 212 days of the year report at least 1 mm of precipitation, ranging from 15 days during April, May and June, to 20 days in October, November, December, January and March. 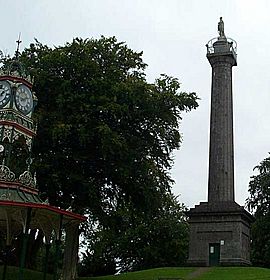 "The Diamond" is the town square. It is located directly beside the Town Hall.

In recent years Enniskillen has hosted an array of international events, most notably stages of the World Waterski World Cup, annually from 2005 to 2007 at the Broadmeadow. Despite its success, Enniskillen was not chosen as a World Cup Stop for 2008.

A professional wakeboarding competition, 'Wakejam', hosted by Erne Wakeboard Club (EWC), took place between 27 and 29 July 2007. Top riders from around the world, as well as local riders, took part.

Enniskillen Airport hosted Heli Challenge: The Premier Helicopter Championship in 2009, 2010 and 2011. Heli Challenge is a competition which tests the skill of some of the best helicopter pilots from across the British Isles.

For the past two years, Enniskillen has played host to the Ireland Horizons Unlimited Travelers Meeting, an event that draws motorcyclists from across the country and across Europe. The 2010 HU Ireland meeting raised £506 for Motorcycle Outreach, through the sale of raffle tickets and the generous donation of prizes.

Railway lines from Enniskillen railway station linked the town with Derry from 1854, Dundalk from 1861, Bundoran from 1868 and Sligo from 1882. By 1883 the Great Northern Railway (Ireland) absorbed all the lines except the Sligo, Leitrim and Northern Counties Railway, which remained independent throughout its existence. In October 1957 the Government of Northern Ireland closed the GNR line, which made it impossible for the SL&NCR continue and forced it also to close.

The nearest railway station to Enniskillen is Sligo station which is served by trains to Dublin Connolly and is operated by Iarnród Éireann. The Dublin-Sligo railway line has a two hourly service run by Irish Rail Official site – Timetables, bookings and operations The connecting bus from Sligo via Manorhamilton to Enniskillen is route 66 operated by Bus Éireann.

Enniskillen has a World War II-era airport, Enniskillen/St Angelo Airport. The airport had scheduled flights in the past, but now serves mainly private traffic.

The town is on the main A4/N16 route linking Belfast and Sligo, and on the main Dublin to Ballyshannon route, the N3/A46/A509.

All content from Kiddle encyclopedia articles (including the article images and facts) can be freely used under Attribution-ShareAlike license, unless stated otherwise. Cite this article:
Enniskillen Facts for Kids. Kiddle Encyclopedia.