St. Macartin's Cathedral, Enniskillen, is one of two cathedral churches in the Diocese of Clogher (the other is St Macartan's Cathedral, Clogher) in the Church of Ireland. It stands on high ground overlooking the town of Enniskillen, County Fermanagh, Northern Ireland in the ecclesiastical province of Armagh.

It was completed in 1842 as St. Anne's Parish Church but rededicated as St. Macartin's Cathedral in 1923. It incorporates elements of a former church building and has a 150-foot (45 m) tower and spire. The tower houses a peal of ten bells, which can also be chimed to play tunes. The three manual tracker action organ consists of thirty-three electro-mechanically operated speaking stops, together with full pedal board and enclosed swell and choir division.

The dean and chapter of Clogher have their stalls in this cathedral and also at the senior cathedral in Clogher. 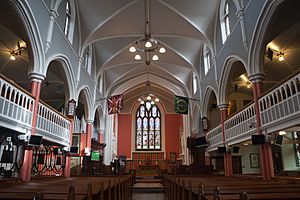 The first church building on the site was completed around 1627 as part of the original building of the town of Enniskillen. By 1832 that building had become structurally unsafe and was replaced by the present building, which was completed in 1842. The chancel was enlarged in 1889.

In 1923 the church was rededicated as St. Macartin's Cathedral, thus becoming the second cathedral of Clogher Diocese.

On 26 June 2012, Queen Elizabeth II attended a thanksgiving service at the cathedral for her Diamond Jubilee. The service was led by the Kenneth Hall, the Dean of Clogher, the address was given by Alan Harper, the Anglican Archbishop of Armagh and the lesson was read by Peter Robinson, the First Minister of Northern Ireland. The intercession prayers were read by Ken Lindsay, the President of the Methodist Church in Ireland; Cardinal Seán Brady, the Archbishop of Armagh and Dr Roy Patton, the Moderator of the General Assembly of the Presbyterian Church in Ireland. Following the service, the Queen made the short walk to St Michael's Catholic church where she met representatives of local community groups. This was the first time that she had visited a Catholic church in Northern Ireland.

All content from Kiddle encyclopedia articles (including the article images and facts) can be freely used under Attribution-ShareAlike license, unless stated otherwise. Cite this article:
St Macartin's Cathedral, Enniskillen Facts for Kids. Kiddle Encyclopedia.