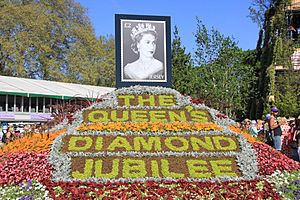 Display at the Chelsea Flower Show celebrating the Diamond Jubilee

A royal pageant on the Thames was one of several events which marked the special anniversary. The Queen and members of her family were on board the Spirit of Chartwell royal barge. The barge was joined by a 1,000-boat parade down the river Thames.

All content from Kiddle encyclopedia articles (including the article images and facts) can be freely used under Attribution-ShareAlike license, unless stated otherwise. Cite this article:
Diamond Jubilee of Elizabeth II Facts for Kids. Kiddle Encyclopedia.